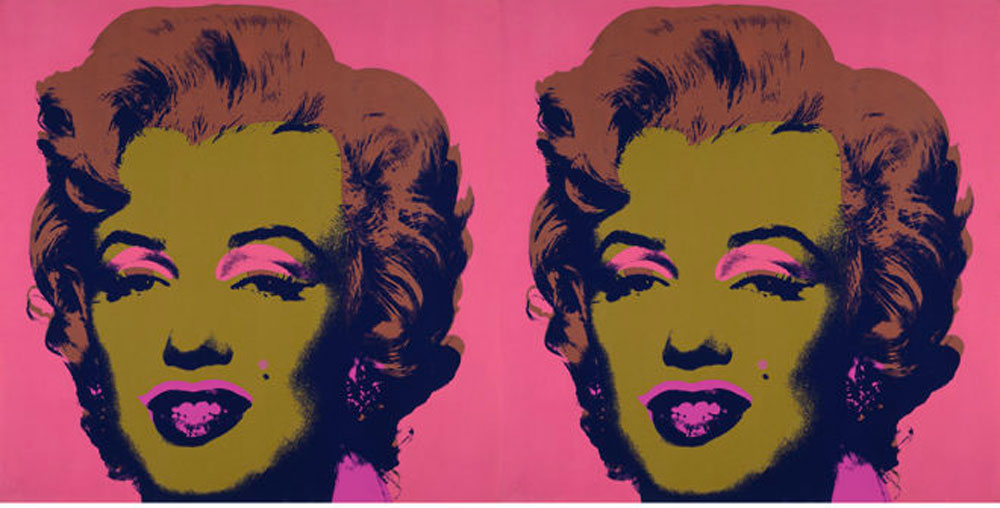 In “Andy Warhol: Icons,” The Fralin Museum of Art at UVA brings together prints the Andy Warhol Foundation gave to the museum in 2014, along with works from a number of loaned sources, to explore the concept of icon in both a traditional and contemporary sense. As one of the most prominent 20th century icons, Warhol is both the creator of the work on view and the subject of the show.

The prints are handsomely displayed against black walls, which cause the vivid colors to pop. Marilyn, Liza, Jackie and EIIR—the latter coated in diamond dust—are all here, as well as some lesser-known royals. There’s also what might be the closest thing to an original icon in Warhol’s take on Piero della Francesca’s “Saint Apollonia.” To underscore the point, a 15th-century painting of Saint Apollonia, on loan from the National Gallery of Art, is placed alongside the Warhol versions.

Mao and Elvis, two major 20th century icons whom Warhol immortalized, are missing, along with Elizabeth Taylor. But icons of a different sort, the more unusual “Cowboys and Indians” series, which features Native American figures Geronimo and Sitting Bull, as well as Annie Oakley and Theodore Roosevelt, are hung together in their own room to dramatic effect. In several instances the works are displayed in multiple versions as opposed to just one image. This allows the viewer to see how the application of pigment in the printing process alters the image.

For instance, Marilyn Monroe is transformed from a recognizable representation of herself in one, to a veritable Gorgon in another version, suggesting the steep price of fame. Warhol produced his first Monroe piece, “Marilyn Diptych” (1962), from which these derive, using a “Niagara” publicity still soon after her death to take full advantage of the shock and notoriety surrounding it.

Arguably the most influential 20th century American artist, Warhol challenged entrenched formal and contextual standards. A talented commercial artist with lofty ambitions, he knew what looked good. He also realized that the quintessentially American realms of advertising and mass production yielded the inspiration and means to create something wholly original that would resonate with viewers. When the wagons of the recondite art world initially circled against him, Warhol persevered on his own terms, answering Jasper Johns’ haute art Ballantine Ale cans (“Painted Bronze,” 1960), with his breezy “Campbell’s Soup Cans” (1962). It was an audacious move that signaled a coming sea change.

But what began as conceptually interesting morphed into something different in the post-Factory years as Warhol shifted his attention to portraits of the beautiful people done as commissions and for covers of his Interview magazine. While they enhanced his fame and pocketbook, there’s something hollow about these works. There isn’t any “there” there.

Warhol would agree. He famously said his art didn’t mean anything. Was this a brilliant commentary or shrewd marketing or eccentricity? It’s hard to know. Certainly, for all his coopting and commenting on fame, Warhol was also dazzled by it and pursued it doggedly. In post-Kardashian America, Warhol’s self-promotion appears rather charming, quaint even. But as both acolyte and high priest of the cult of celebrity, he helped usher in the likes of Kim and Kanye.

With eye-popping color, slick presentation and frisson-packed subject matter, Warhol’s work has an easy-on-the-eyes facility. It also brings with it the sex, drugs and rock n’ roll glamour of The Factory and Studio 54. Who doesn’t want a piece of that? On a purely superficial level, the work is easy to understand and recognize for what it is. This also means it’s easy to figure out how much a Warhol costs—important info in this era of billionaires, when keeping up with the Joneses has shifted from pricey handbags and cars to the serious big-ticket items of expensive contemporary art.

For work that isn’t about anything, Warhols continue to raise big questions about what constitutes value and how it is established. In Warhol’s case, there’s been some controversy over attribution with works that were long considered authentic being reassessed. It’s a slippery slope. With the exception of his early work, Warhol was largely removed from it, directing it from afar and then approving and signing it after completion. Add to this the multiple nature of the work and you get something whose value should, by all rights, be adversely affected. And yet Warhol’s popularity remains intact. For someone who questioned the very nature of art, this would be gratifying indeed.

Warhol opened up a door to a world not only populated by the Kardashians, whose baseless fame has endured well beyond their allotted 15 minutes, but also to Jeff Koons and his ilk. Art has become a commodity acquired and traded like any other. To say this has always been the case is simply not true. Picasso was not looking at the bottom line when he was working. Yes, he had an ego and certainly enjoyed the adulation that surrounded him, but his motivation was the creative fire that burned within. The same can be said about the incomparable Gerhard Richter, whose work is substantive, challenging and also commands the stratospheric prices enjoyed by those who have more than a whiff of hucksterism about them. It’s unfortunate that plenty of lesser-known, truly talented artists are overshadowed by the prevailing commercialism and vapidity. If there was room for both, it wouldn’t be so bad, but, as is true in other sectors, there is very little trickle down, and our culture is the worse for it.