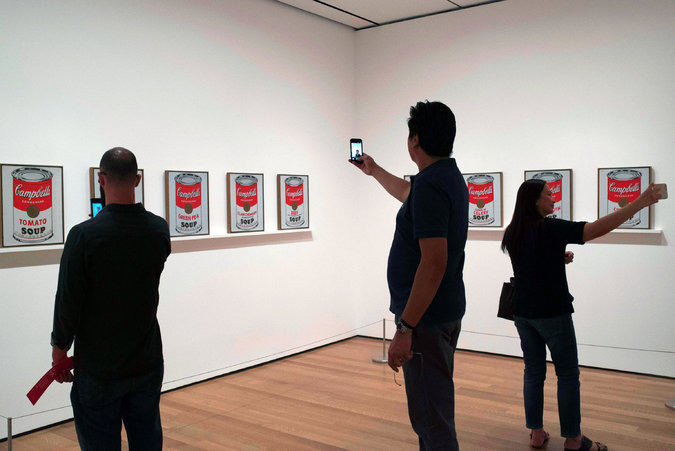 The F.B.I. is offering a $25,000 reward for the recovery of seven screen prints of Andy Warhol’s Campbell’s Soup cans after they were snatched from an art museum in Springfield, Mo.

The prints of the cans, which are among the artist’s most recognizable works, had been part of the Springfield Art Museum’s collection since 1985, and were currently on display in a special exhibit of British and American pop art. The prints, not to be confused with Mr. Warhol’s original set of 32 soup can paintings, were from a later series called Campbell’s Soup 1. They were made in 1968, about six years after Mr. Warhol’s paintings created a cultural sensation (and divided the art world). The F.B.I. estimates that the total value of the prints, which came in a set of 10, to be about $500,000.

But the value could be a lot less now, because the thieves made off with only seven of the 10 prints: the beef, vegetable, tomato, onion, green pea, chicken noodle and black bean cans.

The Warhol prints were a point of local pride in Springfield, according to Lisa Cox, a spokeswoman with the Springfield Police Department. “They were one of those kinds of ‘claim to fame’ types of pieces,” Ms. Cox said.

The soup can prints were more than three feet tall and two feet wide. They were displayed on a wall in white wooden frames. Because they are delicate, they had been displayed only a handful of times over the years.

The prints are believed to have been snatched after the museum was closed and the doors were locked around 5 p.m. Wednesday, Ms. Cox said.

The museum does not have a security staff after hours, and when the doors were opened the next morning around 8:45 a.m., employees noticed that the prints were missing. The Springfield Police Department and the F.B.I.’s Art Crime unit are working together to investigate the thefts.

Ms. Cox said that no leads have been developed. “We’re looking at everything,” she added.

The work of Mr. Warhol, who died in 1987, has been iconic and controversial for decades. Even casual art fans are familiar with Mr. Warhol’s colorful screen prints of Elizabeth Taylor and Marilyn Monroe, but the Campbell’s soup can paintings are among the most instantly recognizable works created during the Pop Art movement. Much has been written about whether or not Mr. Warhol’s taste in subjects constitutes art, and his works have been mass reproduced to the point that spotting an authentic Warhol work is particularly difficult. (Posters of the Soup Can 1 prints can be purchased for about $75 online.)

Ron Rivlin, who owns Revolver, a Los Angeles gallery specializing in Mr. Warhol’s art, said that there were 250 prints made of each type of soup in the Campbell’s Soup 1 series, for a total of 2,500 prints.

He estimated that there are about 50 complete sets of 10 prints left in existence that haven’t been mishandled, lost or destroyed. Taking only seven of the 10 total prints devalues whatever profit thieves would hope to make off the heist, Mr. Rivlin added.

Even though thousands of prints were made, Mr. Rivlin said that the stolen works will be difficult to sell at auctions or to galleries. The authorities watch these avenues closely, and collectors report thieves. Last year, Mr. Rivlin said he and other Warhol specialists were contacted by people who tried to sell a set of nine Warhol prints that were swapped out for reproductions and stolen from the wall of a business in Los Angeles. Those pieces, worth about $350,000, were later recovered.

“It’s pretty much like a black market,” Mr. Rivlin said. “Whoever they sell it to would need to know that they’re stolen.”

At the museum in Springfield, only three prints remain in the exhibition, which is now closed to the public: Pepper pot, cream of mushroom and consommé (beef).