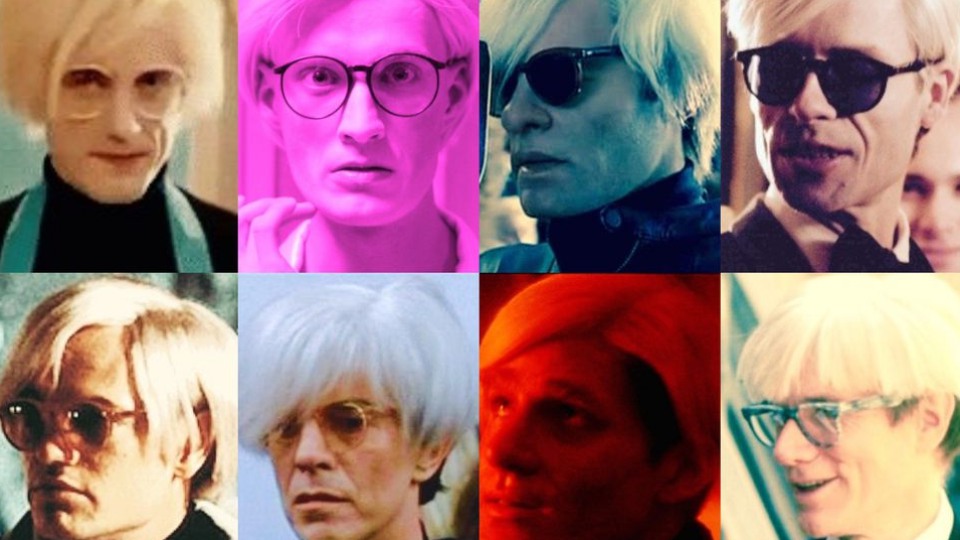 What was it that Andy Warhol once said? That in the future, everyone would play him in a movie or TV show for 15 minutes? Over the past couple of decades, filmmakers and TV producers have used the pop artist in a bunch of different ways: to tell true stories about the New York art world, to quickly signal “the 1960s,” or just to play around with Warhol’s image as a deadpan, inscrutable fashionista who dabbled in a lot of different disciplines. Ultimately, the eight Warhols below are variations on a theme—like panels in a screen-print by the man himself.

One of the most recent movie Warhols is a prime example of the recent trend toward heavily fictionalized Andys. As “Agent W,” Bill Hader starts out doing a spot-on impression, right down to the blank expression and the soft monotone voice. Then Will Smith’s Agent J finds out that W’s “spacey artist” shtick is just an act, meant to get him closer to the kind of freaks—possibly of alien origin—who’d hang around The Factory at the end of the 1960s. This is what gets done with Warhol these days: reimagining him as a character even more fascinating and offbeat than he actually was.

The surrealist comics behind The Mighty Boosh have spent two seasons of their new series Luxury Comedy putting their own perverse spin on sketch comedy and sitcoms. Tom Meeten has starred throughout as a broadly stiff Andy, who works menial jobs with a thin, unconvincing smile. Here again is a Warhol who’s supposed to be the one we all know—the eccentric celebrity with famous friends—but is also meant to bridge the gap between Noel Fielding and Nigel Coan’s whimsical world and our own sometimes equally strange reality.

The Rocky Horror Picture Show and Shock Treatment director Jim Sharman returned from a 30-year filmmaking hiatus to helm one of the few productions that puts Warhol in the lead rather than using him as colorful set-dressing. Though it’s only 40 minutes long, the musical Andy X packs in quite a bit, jumping off from the story of the artist’s death to consider his larger cultural impact. Actor Akos Armont doesn’t attempt much of an imitation, instead choosing to connect Andy to another role he plays in the short, as a poet who draws inspiration from the greats.

Though Sienna Miller gives one of her best performances in this Edie Sedgwick biopic, Guy Pearce’s turn as Warhol is even more memorable. Forgoing the “aloof alien” approach that so many actors take to Andy, Pearce’s interpretation is more sinister, depicting him as a ruthless impresario who created his Factory family of misfits primarily so he could exploit them. Like the film as a whole, the Warhol here didn’t sit well with some people who’d witnessed the Factory first hand (like Lou Reed), but Pearce is entertaining as a movie character. His is far from the nicest cinematic Andy, but it’s definitely the liveliest.

Title aside, Mary Harron’s indie drama I Shot Andy Warhol isn’t really about the artist—though it is about the art. Lili Taylor plays Valerie Solanas, a fiery, unstable feminist writer who was drawn to the Factory crowd and then became disillusioned by the political indifference and grinding work ethic of Warhol and associates. Jared Harris captures this young, industrious, ambitious Andy, who has no idea that letting Valerie into his life is going to culminate in an act of violence that will change the way he socializes—which had been a big part of his overall aesthetic.

Easily the most endearing cinematic Warhol, David Bowie’s version shows him as a childlike enthusiast who helps a young painter because he sees in the 1980s New York new wave some of the wonder and excitement of his own generation. A young Jeffrey Wright makes his mark as Jean-Michel Basquiat, a graffiti artist with a poetic streak, a spacey lilt, and a willingness to hustle. But Bowie’s Andy—with his gulping voice and mild expressions of delight—gives Wright something to play against every time he’s on-screen, even if it’s just to stay straight-faced while the rock star says “Pitts-burrrrgh.” The movie frames these two as true peers, though they were born decades apart.

Warhol’s primary connection to the 1960s rock ’n’roll culture was his backing of The Velvet Underground, whose music scores a scene in Oliver Stone’s Doors biopic, when Val Kilmer’s Jim Morrison pops by one of Warhol’s “Exploding Plastic Inevitable” parties/happenings. The Doors were mystical and melodic where Velvet Underground was street-smart and raw, but both bands had highbrow affinities, and Stone finds a natural pivot-point between the two bands via Warhol. As played by Glover, Warhol is a happy little sprite, making baffling pronouncements while welcoming anyone into into his circle—provided they’re as handsome and famous as Morrison.

Nobody was ever a better Warhol than Warhol, who played “himself” in his own films and in public appearances—especially in the late 1970s, when he and nearly every other New York celebrity of note would hang around Studio 54. The ultimate manifestation of Andy The Star came when he did an extended cameo on a 1985 Love Boat episode, during the show’s penultimate season. Acting opposite Happy Days’ Tom Bosley and Marion Ross, the artist spoofed his own reputation as a rich, image-conscious weirdo, in what was either a case of Warhol being an incredibly good sport, or him realizing that once any version of Andy Warhol gets transferred onto a screen it becomes whatever the audience wants it to be.