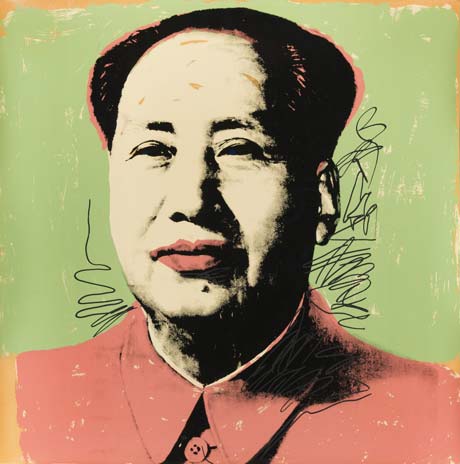 Against a wall in the Columbia Museum of Art’s main gallery, five framed images of one of the 20th century’s most iconic figures lean, waiting to be hung. The three-foot squares of paper are splashed with various colors and squiggly lines, shifting the appearance of the face — dark brown making it seem bloated and sleepy, a deep red making the eyes glare tense and mean.

When the prints were produced back in 1972, the face belonged to one of the most powerful and controversial leaders in the world, the posters reimagining a propaganda portrait that had been reproduced millions of times. Today, the visage isn’t nearly so universally recognized, belonging to a foreign head of state whose name belongs to the history books

Starting this Friday, these prints and five other likenesses of Chairman Mao, the communist leader of China from 1949 until his death in 1976, will debut as the centerpiece of From Marilyn to Mao: Andy Warhol’s Famous Faces. The new exhibition, which runs through Sept. 18, celebrates Warhol’s enduring influence on pop culture and modern art — but just as importantly, on the nature of celebrity. The 10 prints of Mao Zedong — a complete set given to the museum by an anonymous donor — are a fitting anchor for this theme, a case study in how fame fades, evolves and distorts over time.

Starting in the late ’50s and into the 1960s, Warhol — a painter, filmmaker and illustrator from Pittsburgh — became, pretty much inarguably, the most prominent force in American pop art. Reacting against the pretensions of fine art, dominated at the time by abstract expressionism, the pop art movement incorporated elements from popular culture — advertisements, comic books, rock ‘n’ roll, etc. — in an effort to prove that the most accessible images can also be artistically meaningful.

From Marilyn to Mao is a new exhibition organized by the Columbia Museum of Art to celebrate its new acquisition. It’s a valuable find, because while Warhol printed many sets of the Mao images, art dealers have subsequently split most of them up, maximizing their resale value. A complete collection of Mao prints sold for $1.1 million last year at Sotheby’s auction house in New York, and while other museums — including the Andy Warhol Museum in Pittsburgh — also have full sets in their permanent collections, such sets are still hard to find.

“There isn’t a Mao store where you could just go get that,” explains Will South, chief curator at the CMA. “We would never have that kind of cash just laying around, and you’d have to have it at the very same time that a set came up. That’s the impact [of the anonymous donation], really — giving us something that we would probably never have the cash to have. And if we had the cash, would this be available? You have to sort of envision this world where the only way you’re going to get something like this is the stroke-of-luck gift, which just happened to hit us.”

The rest of the works — 45 of them — are on loan from the Warhol Museum, Bank of America’s surprisingly robust modern art archive and a few private collections, bringing the exhibition to 55 total works. From Marilyn to Mao consists only of paper prints, partially because similar works on canvas are more highly prized — Sotheby’s sold a standalone Mao print for $14.5 million last month. Presenting more expensive canvas works would have driven up the museum’s insurance for the exhibition. But the pieces that will be on view in Columbia are still sought after, largely because of Warhol’s own enduring celebrity.

Born in 1928 in Pittsburgh, Warhol showed a lot of talent in his youth, taking classes at the Carnegie Museum of Art and winning several drawing awards while in high school. But the seeds of artistic rebellion were there early, too.

“At Carnegie Institute for Technology (now Carnegie Mellon University), where Warhol earned a degree in pictorial design, his offbeat, nontraditional and sometimes irreverent drawing style did not always meet his professors’ academic standards,” according to Warhol.org. “At one point they forced him to do extra work over the summer to remain in good standing at school.”

After he graduated, Warhol moved to New York in 1949 where he started a successful commercial design career, illustrating magazines and ads. As a commercial artist, he nonetheless strived to innovate, using a complicated technique called blotted line that combined elements of drawing and printmaking and formed the basis of his signature illustration style.

Shifting his attention from commercial design in the late ’50s, Warhol pioneered American pop art, first with works that brashly co-opted commercial imagery — soup cans, hamburgers, shoes and on and on — and then moving on to his equally renowned portraits. In the early ’60s, he opened his storied art studio, The Factory, a spot that soon became a hub for the city’s lavish counterculture and cultivated the careers of The Velvet Underground and fashion model Edie Sedgwick, among others. By the mid-’60s, Warhol was as much a celebrity as many of his subjects.

Nearly three decades after his death in 1987, Warhol’s legend still looms large. The frame on the Marilyn Monroe print preparators Mike Dwyer and Daniel Richardson hang during Free Times’ early preview of the exhibition is cut out on the back, allowing the artist’s famous signature to be viewed without removing the piece.

Warhol’s work ranged far and wide, through music, film, photography and other media. But his screen prints, both on canvas and on paper, remain his most iconic creations. And while he might be most famous for crisp images of Campbell’s soup cans, his portraits are similarly powerful. From the incongruous color splotches on the Monroe prints he produced shortly after her death in 1962 to images of Superman and Edward Kennedy that sparkle with very real diamond dust, the 55 portraits in From Marilyn to Mao probe fame from a variety of angles.

“He was obsessed with fame,” South offers. And as the Mao portraits prove, Warhol’s interest in notoriety extended far beyond the familiar enclaves of film and popular music

It was “not just celebrities, but politicians and sports figures and historical figures long dead,” South continues. “So we put together a show that shows all of these people. You get this context where fame and celebrity, really driving forces for Warhol and how art can operate, [play] on our fantasies and our desires and our infatuations.”

True to South’s word, the exhibition offers a diverse array of faces. One portrait tints Theodore Roosevelt’s rugged presence with tactile splashes of purple and blue. Another skews a photo-real image of Mick Jagger with colorful boxes that resemble graffiti tagging. A series of portraits of New York transvestites blurs sexuality with a barrage of bizarre shapes and shades, while depictions of Judy Garland and basketball superstar Kareem Abdul-Jabbar highlight their features in stark black and white. They come from different walks of life, but the images are all striking, each with something different to say about the impact of celebrity on popular culture.

“Warhol said ‘15 minutes of fame’ back in the ’60s,” says Karen Brosius, executive director of the CMA, referring to the now ubiquitous phrase drawn from the program Warhol wrote for an exhibition in 1968. “It kind of is even faster and burns even brighter today. And there will probably be people in this exhibition that people come and they say, ‘I don’t even know who that is.’ And that’s supposed to be a famous face. It’s going to raise a lot of interesting discussions about identity and who says who’s famous. And that’s really what Andy was getting at. You’re saying it now, but will that person be famous 15 minutes from now? Who knows. And I think that will be a fun part of the exploration of the show.”

The CMA is also taking pains to make these discussions relevant to modern ideas of celebrity. A selfie station in the middle of the gallery will allow visitors to capture and manipulate their own likenesses — an acknowledgement of today’s digital pathways to increasingly fleeting fame. The museum also convinced the Warhol museum to drop its typical restrictions on photography for the works it loaned to the exhibition, meaning attendees will be able to take cellphone photos of the works, spreading them across the Internet, adding another layer to the cult of celebrity surrounding these well-known faces.

“The way the world works today, when you go to an institution like a museum, the social media aspect is alive and well,” Brosius says, “and you want to go in and you want to take a picture of your friend in front of a work of art.”

Another aspect of Warhol’s work emphasized by the Mao portraits is the screen printing process itself. Utilizing stencils and various colors of ink and paint, Warhol was able to recreate images with a dizzying array of bright colors, and to replicate them many times without sacrificing quality. It wasn’t an unknown process before Warhol got a hold of it, but it was previously seen almost exclusively as an industrial process, used famously during the Great Depression by the Federal Arts Project of the Works Progress Administration, giving work to unemployed artists by making informational posters. But Warhol’s example helped make it an accepted art form, inspiring legions of subsequent printers to create their own screened art — be it abstract illustrations or concert posters, T-shirts and myriad other items.

“Warhol was weaned on a process that had been around already for a long, long time in mass quantity,” South posits. “It’s simple. It’s direct. It’s graphic. And the essential qualities never changed. Anybody could screen print. This is art for everybody. Everybody can join in on this. And Warhol was not remotely connected to the WPA, coming along long after it had ended, but those fundamental design concepts were still in place with screen printing. It was still easy to do. You could still create bold, highly colorful prints and replicate them easily in high quantity and not lose quality the way you might with an etching or a lithograph.”

In From Marilyn to Mao, these ideas of highest celebrity and infinite replication never feel at odds. The original image of Mao that Warhol used in his set was repurposed from the Little Red Book, a book of the leader’s quotations that is thought to be one of the most printed books in history. Other works in the exhibition draw from Warhol’s own photography, but they all focus on their subjects’ most essential traits, blowing them out until they become as much brands as people. They’re all meant to be highly accessible, to highlight the simplified personalities that we assign to our icons.

“He understood what people were obsessed by, and mainly they were obsessed by celebrity,” South says. “The other thing he understood about people was that they gravitated towards easy. People like fast food. People like food in a can. People love McDonald’s. People like drive-thrus. The thing about a soup can that’s so deceptively simple is that people not only like Warhol, they like fast food. They get this. They get pop culture. It’s part of how they live. It’s comforting. There’s this symbiotic relationship between you and the thing that he’s depicting.”