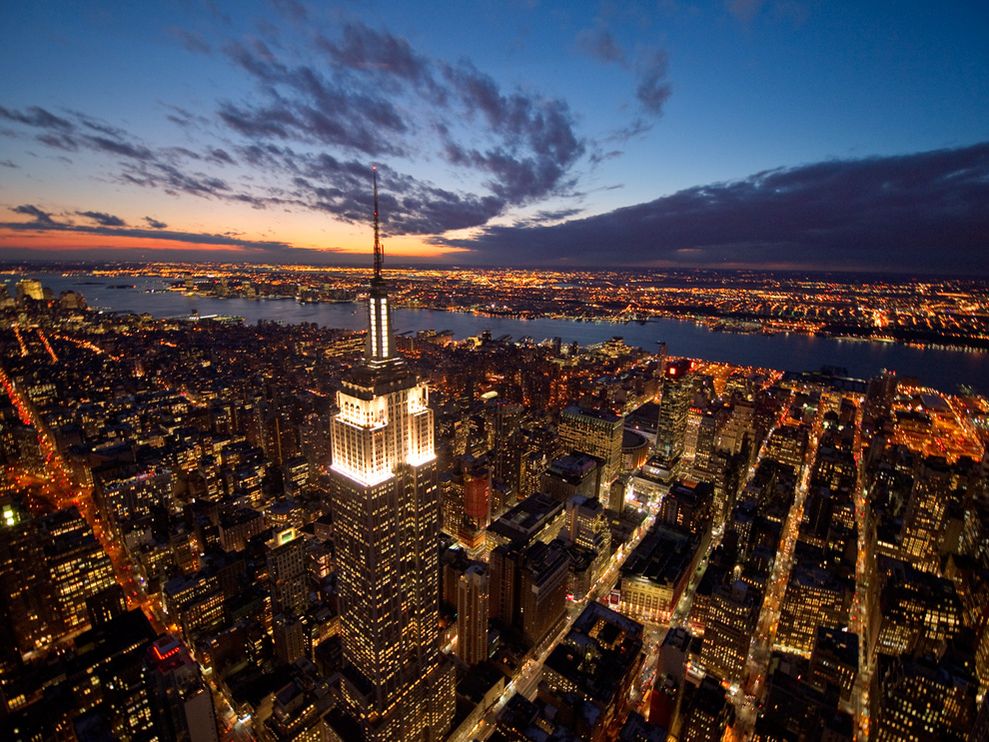 On May 1, New York City will celebrate two momentous occasions: the public opening of the new Whitney Museum building at 99 Gansevoort Street and the 84th birthday of the Empire State Building (see Look Inside the New Whitney Museum and Opening Preview). The two institutions have partnered to create an LED light show featuring twelve iconic artworks interpreted by Emmy-nominated production designer Marc Brickman (who has previously worked with the likes of Pink Floyd and Bruce Springsteen).

Tributes to pieces by Georgia O’Keeffe, Edward Hopper, Andy Warhol, Peter Halley, Elizabeth Murray, Mark Rothko, Barbara Kruger and others, will last 30 minutes each, with the light show beginning at 8 p.m. on May 1 and ending at 2 a.m. the following day. Most of the works that inspired the light show are also on view in the museum’s inaugural exhibition, “America Is Hard to See” (see Brian Boucher’s 10 Reasons To Be Excited About The New Whitney Museum, The Whitney’s Hidden Gems: 10 Masterworks Not to Miss in the New Building).

“We’re thrilled to see these incredible works from the Whitney’s collection interpreted on one of the most iconic buildings in the world—one that has been the subject of many an artist’s work,” said chief curator Donna De Salvo in a press release. “We can’t imagine a more spectacular way in which to signal the opening of our new building and celebrate the art and artists of the United States.”

How did Brickman go about translating works by some of the most revered artists of the 20th century into an LED light display large enough to cover the massive structure? “I thought this was an opportunity to take the greatest artists in the world and use that as inspiration, their color palettes and the way they painted,” he told the New York Times. “For instance, Rothko and how he used color—and really try to emulate that on the building.”

“This is not meant to be a reproduction; it’s meant to be representational. This is performance art,” agreed Anthony E. Malkin, the chairman and chief executive of Empire State Realty Trust, which operates the building.

A special lighting ceremony will take place prior to the celebration, allowing a handful of the artists included to flip the switch and illuminate the building. A private viewing of the light show will take place that evening at the museum, which boasts sweeping views of the city from its four outdoor terraces.

For those following along from home, there will be a real-time online slideshow with views of the building, along with images and information about the artworks that inspired the lights. More information is available at the Whitney Museum website.