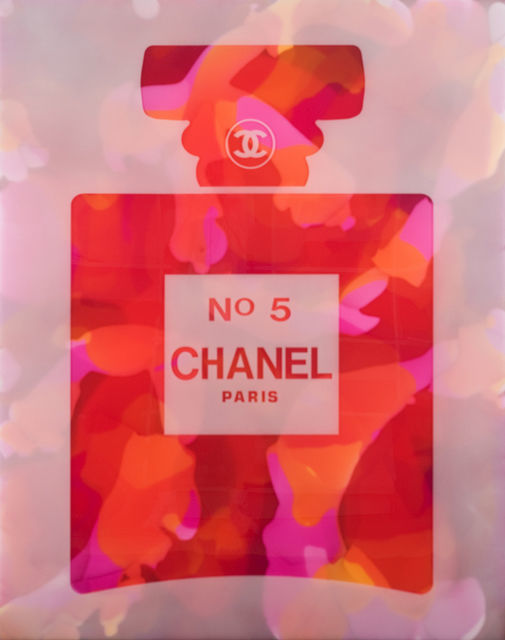 The spirit of Andy Warhol currently hangs, smirking and sardonic and brilliant, over the galleries of the Cornell Museum of Art. The museum’s “Bling: Art That Shines,” a group show featuring 16 contemporary artists who employ elements such as crystals, diamond dust and glitter to create sparkling paintings, sculptures and installations, isn’t designed with New York Pop Art pioneer in mind. But it just so happens that many of the artists deploy their sparkling, bejeweled creations for the same ironic, pop-cultural distance that propelled Warhol to stardom.

Consumer products are recreated like talismanic shrines of eye-popping color and light, from Alberto Murillo’s “Chanel”—a painted image of the titular perfume bottle, created from sand-blasted acrylic and UV resin—to Jonathan Stein’s Swarovski crystal-studded sculptures of Haribo Gummy Bears and Starbucks coffee cups, which effectively turn disposable junk-food commodities into priceless centerpieces. You don’t know whether to laugh, cry or simply be dazzled; Warhol’s worship at the altar of Campbell’s and Brillo has nothing on this.

“Bling” even has its own repurposed image of Marilyn Monroe, whose face, thanks to Warhol and many others, has become both subject and object, sign and signifier. Russell Young’s “Marilyn Portrait” features diamond dust (diamonds are a girl’s best friend, after all) over her fading sepia-toned visage, creating a sense of false luster over a face that seems to be receding into oblivion. Even Palm Beach collage artist Bruce Helander, not known as a Pop artist, borrows a bit from the Warhol playbook with “Triple Elvis,” a pulpy appropriation of three gun-slinging Presleys.

You could argue that this is a case of the old becoming new again, a tendency that appears elsewhere in the exhibition, too: Camomile Hixon revives the flatness of the post-expressionists with “Gold Horizon” and mid-century text art with works like “Dream” and “Yes.” But a crucial element separates these artists from the 20th century modernists, beyond the sparkle of their media: humor. The shiny sheens of these twinkly canvases and sculptures are accompanied in most cases with a sense of humor that is sometimes sly and cheeky and other times in your face, and this exhibition is a fine antidote against the self-seriousness of earlier generations.

Ashley Longshore is a great example of this. She creates large-scale portraits that satirize the excesses of celebrity by being excessive themselves. “Subtleties Are Not Her Specialty” is the portrait of a star whose face is surrounded by plumes of florid bling, a monument of bejeweled vanity. This desire to be admired takes an even more extreme direction in “Audrey in Slipper Orchid Headdress,” in which the celebrity wears a headpiece so towering that it’s attracted birds—and which would put Carmen Miranda and Isabella Blow to shame.

Then there’s “Designer Ideal Woman,” a multicolored series of sparkling women’s torsos created with automotive paint, resin and glitter by the feminist artist Allie Pohl—each of them a witty commentary on the impossible dimensions of Barbie dolls. It’s exactly the sort of paradigm-challenging work that would have elevated the Norton Musem’s vapid hagiography of Barbie last summer.

The works of Shonagh Adelman likewise marry feminism and humor, with even more provocation. Created entirely from pieces of 4mm colored glass and acrylic crystals, “Bear Antoinette” subverts a royal portrait by depicting a queen in a flowing ballroom dress but with the head of a teddy bear. Adelman’s “Lily La Tigresse” features a pregnant tiger humanoid whose eyes slowly dart right and left, following museumgoers around the gallery; and her “Yellow Grrrls” ups the creepy-funny factor even more by having the titular women blink it us and lasciviously lick their lips.

The result of all this is a lot of painstaking work, with the crystals and diamonds arranged with pointillistic precision, all for, in some cases, a joke. Which brings us back to Stein’s gummy bears and Starbucks cups, which only work because of the artist’s assurance that every tiny crystal is arranged to perfectly recreate a ubiquitous brand. The power of this exhibition, then, is threefold: We marvel at the craftsmanship, stare hypnotically at the choice of sparkly media, and laugh at the intended result. Warhol, for all his artistic road-paving, didn’t do that much.