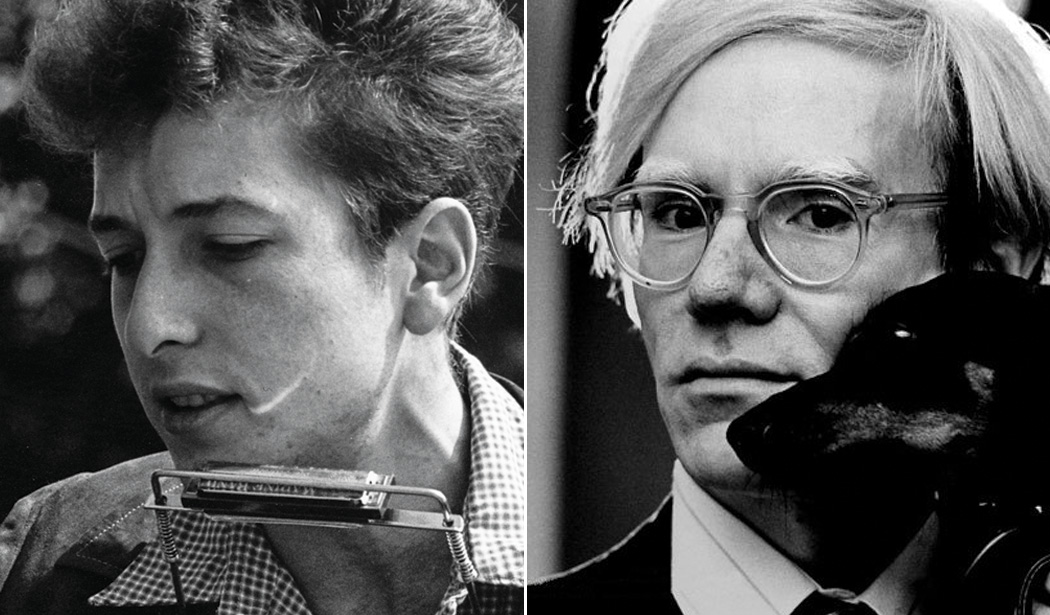 In either July of 1965 or January of 1966, depending of the source, Bob Dylan walked into The Factory, Andy Warhol’s studio, accompanied by a film crew. The contentious meeting that followed would go down in the books as one whose particulars are twisted within the complicated narratives that have surrounded both artists through their lives. On the occasion of Bob Dylan’s 75th birthday, we revisit the scene and try to piece together the history between the two and what happened that day.

The two cornerstones of 1960s popular culture had never officially met, but by various accounts Warhol was star struck by the singer, who was just exiting his troubadour phase and entering his sunglasses-and-wild-hair electric period. Dylan and Warhol had already undoubtedly crossed paths in New York: Warhol, in his memoir, remembers stepping over Dylan, drunk and having fun, while leaving a party on Macdougal Street a few years earlier, and other reports claim Dylan and Warhol were often at the same parties. The two were definitely aware of each other, despite claims to the contrary, and their two camps, described by Victor Brockis in his biography of Warhol as “the two poles of the New York underground,” remained in opposition to each other long after the meeting.

This was mostly due to Edie Sedgwick. The model and actress, who had starred in some of Warhol’s films during this time, had met Dylan’s friend Bobby Neuwirth at the Kettle of Fish, a popular Greenwich Village hangout, two weeks before the Dylan-Warhol encounter at The Factory, according to David Dalton in his book “Who Is That Man?: In Search of the Real Bob Dylan.” (Other accounts claim that Sedgwick and Neuwirth met the year before; the exact timeline remains fuzzy.) She was a fan of Dylan, and soon began a relationship with Neuwirth, who encouraged her to break away from Warhol’s circle. Although there are claims that Dylan also had a relationship with Sedgwick, this has never been confirmed. “I never had that much to do with Edie Sedgwick,” the singer said in a 1985 interview with Spin Magazine. “I’ve seen where I have had, and read that I have had, but I don’t remember Edie that well. I remember she was around, but I know other people who, as far as I know, might have been involved with Edie.”

But Sedgwick, or at least her relationship with Warhol, undoubtedly inspired Dylan’s songwriting during this period. Many have claimed that parts of his song “Like a Rolling Stone,” released in 1965, contain references to that relationship, and that songs from his following record, “Blonde on Blonde,” are influenced by her presence. Either way, Sedgwick’s inclusion in Dylan’s inner circle caused Warhol’s group to start referring to Dylan as “the creep.”

But it’s not clear how much of this had happened already when Dylan showed up at the Factory. According to Steven Watson in his book “Factory Made: Warhol and the Sixties,” it was the artist and filmmaker Barbara Rubin, one of the many people who hung around Warhol at the time, who pushed for the two to meet. She was a friend of Dylan’s, and had appeared on the back cover of his album “Bringing it All Back Home,” but even she couldn’t break the obvious tension that existed as soon as they were in the same room.

“Every time they put a Bob Dylan record on, we’d take it off and put on Maria Calls,” Ondine, a former Warhol Superstar, tells Watson in his book. “And [Dylan] sat there, and he sat in his chair quietly and got more and more pissed off.” Dylan apparently did not like the atmosphere of The Factory, but agreed to sit for a three-minute screen test, shot by Rubin. When it was over, Dylan reportedly walked over and grabbed one of Warhol’s silver “Double Elvis” silkscreens, claiming he was taking it as payment. Warhol, in his memoir, said that he heard rumors that Dylan used the painting as a dartboard. But according to Howard Sounes in “Down the Highway: The Life of Bob Dylan,” he simply mocked the work by hanging it upside-down, and later putting it in a cupboard. Dylan eventually gave it to his manager, Albert Grossman, claiming he and his wife Sara “wanted something ‘practical’ for the house.” Grossman and his wife gave him a sofa in return, and in 1988, sold the picture at auction for $720,000.

Warhol satirized Dylan in a few of his films, including “More Milk Yvette,” “Imitation of Christ,” and the reportedly made but never shown “The Bob Dylan Story.” But despite this, Warhol had, at least in public, kind words for Dylan. “I liked Dylan, the way he’d created a brilliant new style,” Warhol later wrote in his memoir. “He didn’t spend his career doing homage to the past, he had to do things his own way, and that was just what I respected.”

Dylan, though, seems to have held on to his disdain. Although he told Spin Magazine in 1985 that he regretted giving the Warhol silkscreen away, in a 2009 interview with NPR, the journalist Tom Ashbrook, who had recently interviewed Dylan for Rolling Stone, said: “When I raised the name of Andy Warhol he gave me a look like I had just said something rotted from high heaven.”