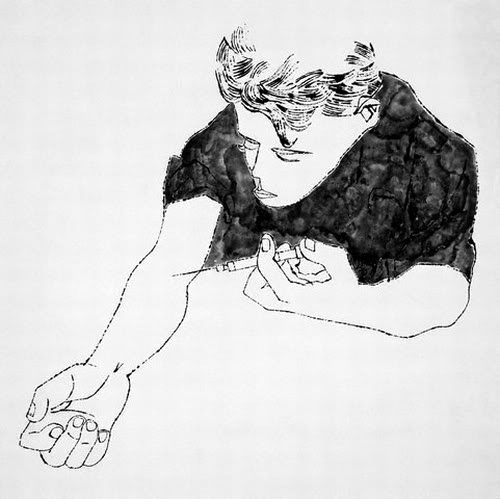 Hands down, shoot up.

That’s the image portrayed in Andy Warhol’s ‘The Nation’s Nightmare’, a CBS radio program in 1951 on drugs and crime in the country. It consisted of six broadcast series, two of which were released on an album cover featuring drawings by Warhol – a young man injecting drugs and two men fighting.

Warhol used his blotted-line technique revealing a darker side of American culture; a technique later used in his ‘Death and Disaster’ series and mid-60 films.

As said by Warhol, “…when you do something exactly wrong, you always turn up something.”

Here is how Warhol applied this technique in the 1950s:

1. Make a line drawing on a piece of non-absorbent paper, such as tracing paper.
2. Combine the piece of paper to a second sheet of more absorbent paper by taping their edges together on one side.
3. With an old fountain pen, ink over a small section of the drawn lines then transfer the ink onto the second sheet by folding along the hinge and lightly press or “blot” the two papers together.
4. (Larger drawings are made in sections. A large blotted line drawing takes more time and multiple pressing.)
5. The process results in the dotted, broken and delicate lines.

This process is characteristic of Warhol’s early illustrations. Warhol often colored his blotted line drawings with watercolor dyes or gold leaf, and he created patterns with hand-carved rubber stamps.

All those art classes taken as a child sure paid off for Mr. Warhol!