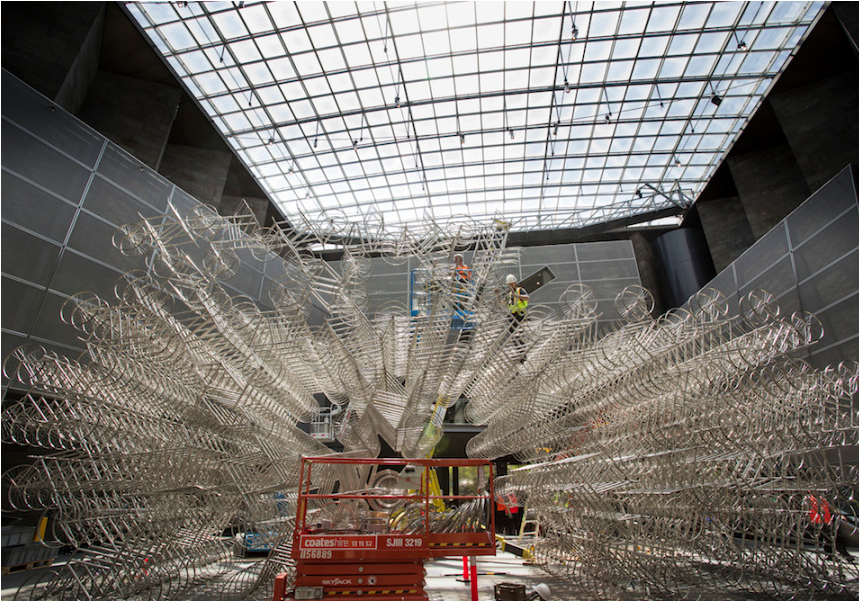 1500 identical bicycles are being suspended in a brilliant effect of infinity at the NGV.

Today we got a first look behind the scenes of the upcoming Andy Warhol / Ai Weiwei at NGV – the gallery’s single-biggest exhibition.

What you’re looking at is a piece called Forever Bicycles by Ai, one of five brand-new works commissioned especially for this exhibition. The work, currently being installed in the NGV’s Federation Court, will stand nine metres tall and feature nearly 1500 identical bicycles arranged to create an effect of infinity.

“Forever” is a popular brand of mass-produced bicycles manufactured in China since the 1940s. This latest work is part of an ongoing Forever Bicycles series that began in 2003.

When Ai was growing up in Communist China, this bicycle brand was a symbol of status.

In a previous interview, speaking specifically about a Forever Bicycles iteration in Toronto in 2013, Ai said:

“When I was a child, the whole society was very poor. To have a bike is very luxury item. The Forever bicycle is the best brand at that time. So if a village or some family have one of them, it will be most admirable.”