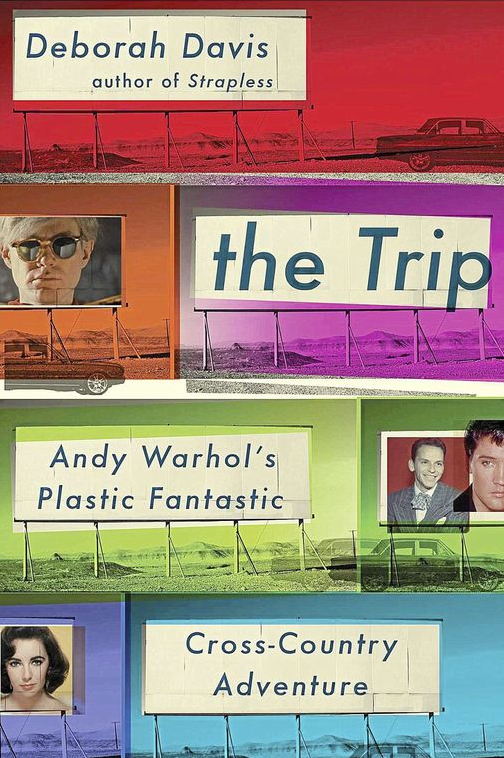 It was a casual, almost throwaway, mention in a book Andy Warhol had written about his life in the 1960s, about a road trip he had taken from New York City to Los Angeles.

“I remember looking from the book I was reading, turning to my husband and saying, ‘Andy Warhol took a road trip,’ ” Deborah Davis said. “I couldn’t imagine Andy Warhol even sitting in a car, much less driving one across the country.”

That brief mention was the spark that set Davis on a journey of her own — one that would retrace Warhol’s trek and result in “The Trip: Andy Warhol’s Plastic Fantastic Cross-Country Adventure” (Atria Books, $26), where the author follows Andy Warhol along Route 66.

Davis will be in Tulsa on Wednesday as the guest of BookSmart Tulsa to talk about her book. The event will be held at the Philbrook Museum of Art, which currently hosts the exhibit “In Living Color: Andy Warhol and Contemporary Printmaking.”

Davis has written a number of books about seemingly small, yet pivotal, moments in history and popular culture, such as “Strapless: John Singer Sargent and the Fall of Madame X,” “Fabritius and the Goldfinch: A True Story of Art, Tragedy and Immortality” and “Party of the Century: Truman Capote and his Black and White Ball.”

Warhol, however, has long been a subject of fascination for her.

“But there are thousands of books about Warhol, and as a writer, I was wondering what I could bring to the party, what I could do that would be different,” Davis said. “Andy Warhol on a road trip was the answer.”

The trip took place in 1963, and the impetus for Warhol to leave New York City was two-fold. An exhibit of his work was to open at the Ferus Gallery in Los Angeles, and Warhol’s newly made friends, actor Dennis Hopper and his wife, Brooke Hayward, promised to host “a real movie star party” for the artist once he arrived.

“For Andy, who was always obsessed with celebrity and movie stars, that party was more important to him than the show of his works,” Davis said. “There was no way Andy was going to miss that party.”

One obstacle to attendance was that Warhol had four days to get to the other side of the continent. And he didn’t know how to drive.

Warhol recruited three friends — two of whom had drivers licenses, one of whom owned a Ford Falcon station wagon — to accompany him on what became a drug-fueled dash from New York to Saint Louis, where the group followed Route 66 into Oklahoma, and then on to Los Angeles.

In the course of her research, Davis discovered that Warhol — notorious for saving everything — had kept all the receipts from this 1963 trip.

“I started out pinning them onto a map, but I realized that if I was going to do this properly, I would have to take the trip myself,” Davis said.

“Unfortunately, my husband, who went with me, doesn’t drive. And we did not have all those 1960s drugs Andy and his friends had. So it took me about seven days to do what they did in four.”

Warhol and his companions made use of Oklahoma’s Will Rogers and Turner turnpikes to make up time on their trip, but one of their stops in the state was for a meal at Clanton’s Cafe in Vinita.

Davis stopped at the cafe, which started in 1927 and has been featured on the Food Network series “Diners, Drive-ins and Dives” in the course of her trip.

“I asked if anyone who had been there in the early ’60s was still around,” Davis recalled. “I ended up speaking with Tommy Clanton (the cafe’s former owner).

“I didn’t say anything about the subject of my book, I just asked him if he recalled anyone unusual coming to the restaurant in that time,” she said. “He immediately said, ‘Well, there was this one fellow, with these little pictures of Marilyn Monroe and soda pop.’ That had to be Andy Warhol. I asked him why he remembered this one person, and he said, ‘Why wouldn’t I? Most everyone that came here then was in cowboy boots and jeans. That fellow just stuck out.’”

To Davis, Warhol’s trek across America was more than an out-of-character jaunt. It was, in her estimation, a pivotal moment in the artist’s career.

“It was the moment that began his transformation from ‘Andy’ into the iconic figure of ‘Warhol,’ ” Davis said. “Driving across America, absorbing all these sights, all those billboards, all the neon — it was a kind of validation of the work he was doing. It was as if he was seeing his work coming to life all through America.”