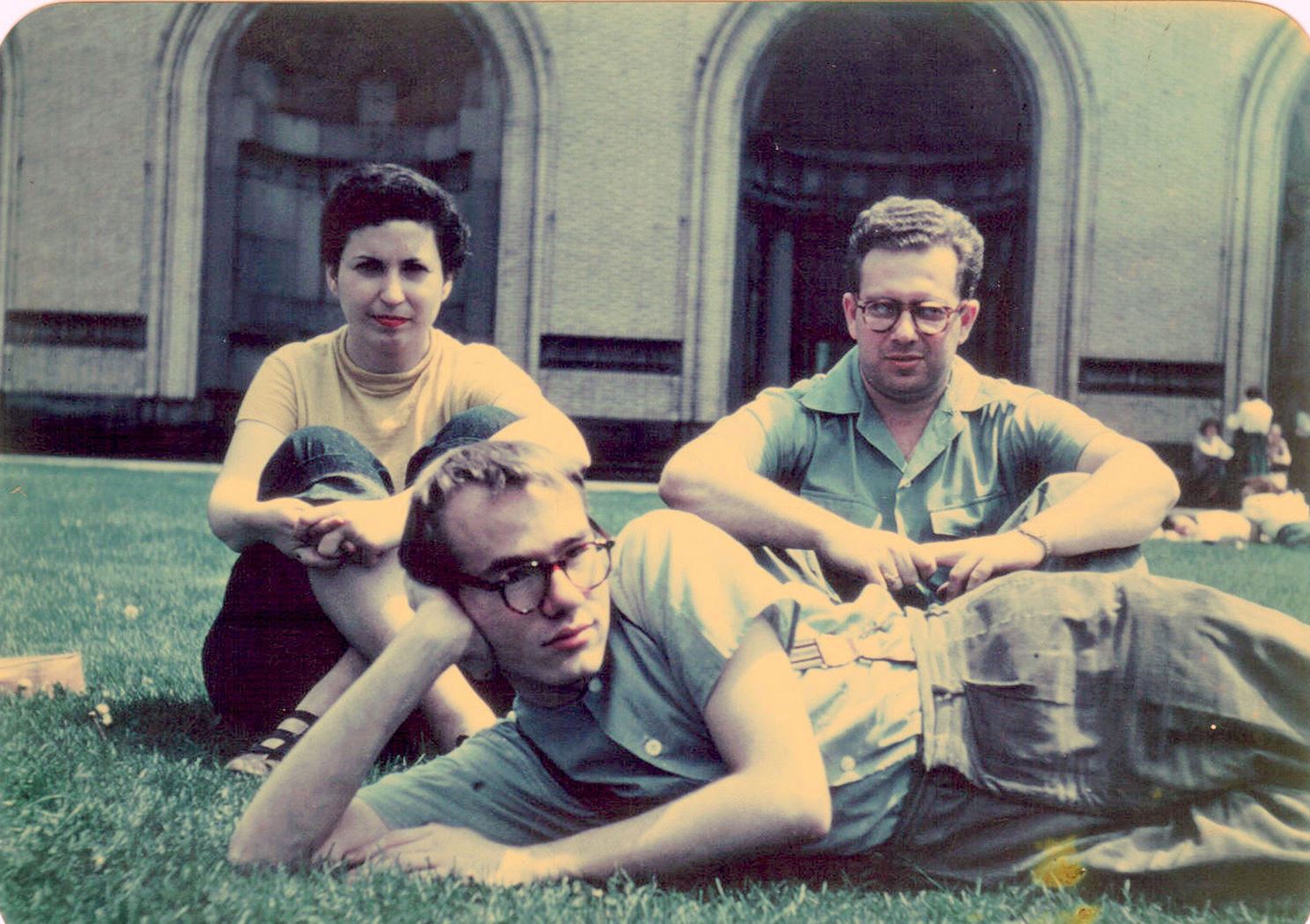 “Pearlstein, Warhol, Cantor: From Pittsburgh to New York” at The Andy Warhol Museum feels a bit like a family gathering where you learn things about your relatives you hadn’t heard before. It’s a rare look into the career beginnings of two talented young artists who achieved considerable success in both commercial and fine arts, and an opportunity to discover another who later chose to apply her talents elsewhere.

Philip Pearlstein, Andrew Warhola and Dorothy Cantor were Pittsburgh natives who met at Carnegie Tech (now Carnegie Mellon University). They developed a friendship that continued after graduation, when they moved to New York City, where Mr. Pearlstein and Mr. Warhola shared an apartment and he changed his name to Andy Warhol. Mr. Pearlstein and Ms. Cantor married in 1950 and Mr. Warhol was a member of the wedding party.

In light of the many books published and global shows mounted in recent decades, one might question whether there was anything new for this exhibition, and the answer is emphatically “yes.”

Artworks and archival materials, including photographs, give insight into the artists’ formative years contextualized within cultural expectations of the time. More significantly, the show’s emphasis is on Mr. Pearlstein, who is long overdue for institutional recognition in his birthplace.

Finally, the sleeper component is the section devoted to Ms. Cantor, whose stunning paintings are exhibited in a museum for the first time.

The exhibition is large but engrossing, its material having been carefully curated to tell multiple stories by Warhol Museum assistant curator of art Jessica Beck and chief archivist Matt Wrbican. The subjects addressed include rigorous Carnegie Tech training, stylistic evolutions, Mr. Pearlstein’s military service, commercial work, and how the artists grew apart as they pursued recognition in New York. Implicit is the drive and creativity each artist had, and the hard work and persistence that carried them through doubt, challenges and invariable compromise.

“The whole story is told through Philip’s lens,” Ms. Beck said, and the first artworks encountered are portraits of Mr. Warhol and Ms. Cantor, and a self-portrait, all painted by Mr. Pearlstein in 1950. The others are nuanced compared to the self-portrait’s experimental colors and expression, but all show an emergent artist grappling with the observation required of portraiture and with the many formal options on the table in a rapidly changing art world.

The three artists came from families that were supportive of their art careers but of modest means. Warhol’s father died before he entered high school, Mr. Pearlstein’s father owned a poultry business and Ms. Cantor’s a smoked-fish business. The two men attended the free Tam O’Shanter Saturday children’s classes at what was then called Carnegie Institute.

Mr. Pearlstein received encouragement as a junior at Taylor Allderdice High School when he won first- and third-place awards in Scholastic magazine’s National High School Art exhibition. This achievement was reported in Life magazine with images of the two winning paintings. One, “Merry-go-Round,” is exhibited; the location of the other is unknown. The next year, he again won first place for “Family Picnic,” also exhibited.

His early celebrity guided his World War II military service. Drafted into the Army, he was assigned to a unit that produced maps, diagrams and charts. Some of these are exhibited along with drawings of military life made when he later shipped with the infantry to Italy, where he immersed in the rich visual culture.

Mr. Warhol had a rough start (report cards show a C in color, and D in drawing classes), and some faculty wondered whether he should remain. But his failures were probably more the result of rebelliousness than lack of potential and under the guidance of legendary professor Robert Lepper, all three matured as artists.

Class assignments allow comparison of Warhol and Mr. Pearlstein and hint at their later expression. When asked to depict the interior and residents of a typical Oakland home observed from outside without interaction with the family, Mr. Pearlstein’s collage is methodical with a precision perhaps influenced by his wartime charting experience. Warhol goes off script, submitting a whimsical interpretation in watercolor of his family’s South Oakland living room, with modifications.

Mr. Pearlstein’s “Seated Model,” painted from a live nude, is formal and straightforward; Warhol’s “Male Figure” is sensual, cropped and hidden. In “String Quartet,” Mr. Pearlstein focuses on members of a concert audience, while Warhol takes the broader “View of Concert Hall.”

In New York, Mr. Warhol succeeded more readily in the commercial design world, while Mr. Pearlstein and Ms.Cantor were better received by the fine arts sector and were exhibited by Tanager gallery. Warhol asked Mr. Pearlstein to show his work to the Tanager, but the gallery rejected the submitted drawings, which were of men kissing, an activity that was not publicly approved in the 1950s. The exhibition curators write that “by many accounts” this drove a wedge between the two men “and they were never as close again.”

Different lifestyles also interfered with their time together, as Mr. Warhol founded the Factory, a social and experimental art beehive, and the Pearlstein family turned to child-rearing and academia. Mr. Pearlstein, who earned a master’s degree in art history from New York University’s Institute of Fine Arts, taught at Pratt Institute, Brooklyn, and for three decades at Brooklyn College.

After marriage, Ms. Cantor continued to paint and to draw, the inspiration for her open curvilinear compositions shifting from Pittsburgh bridges and river views to New York’s subway tunnels. Perspective is used forcefully, from the expansive “Untitled (Allegheny River Bridge)” of circa 1949-50 to the psychological and physical vortex of sensuous, deep brown curving ramps of  “Untitled (Tunnel),” circa 1952-53. She earned a master’s degree at Columbia Teachers College and taught in the New York public schools for two years. In 1957, her first child, William, was born. After the arrival of daughters Julia and Ellen, Ms. Cantor shifted her focus from artmaking to family.

During the 1950s, Mr. Pearlstein tried abstract painting, the new mode that was capturing the attention of critics and museums. His early imagery was derived from landscape, but his first critical nod was won by “Torso” (1953), an abstract morphing of land and body, that was included in a show curated by influential art critic Clement Greenberg.

A decade later he became more intrigued by the human form while attending a drawing group with live models, and four decades ago he began painting his inimitable compositions with nude, or partially clothed female figures that are often described as figurative realism, but are more.

The 1980 kimono-draped woman seated on a parquet floor in the Carnegie Museum of Art collection is a local favorite. The women in his paintings exude ennui more than sexuality, and are often juxtaposed with objects, many of which carry their own symbolic weight. He paints with oil in masterful realist style, and these bodies are indeed far from idealized in proportion or posture.

Mr. Pearlstein is given the exhibition’s last word via six paintings made beyond the exhibition timeline, including three wall-sized works painted this year that debut here (at 92 he is vital and active). It’s noted that for the first time the subjects stare out to meet the gaze of the viewer, as opposed to past cropped or turned away faces. But they’re also masked for the first time. Mr. Pearlstein is still commenting on the larger human condition, perhaps shifting from a society bored with itself to one that has learned how to conceal while navigating a larger world.

Both Mr. Warhol and Mr. Pearlstein made their mark while bucking the system, as they chose Pop art and figurative realism over popular trends. Art patrons are the richer for it. This exceptional exhibition gives insight into the grit it takes to pull that off.