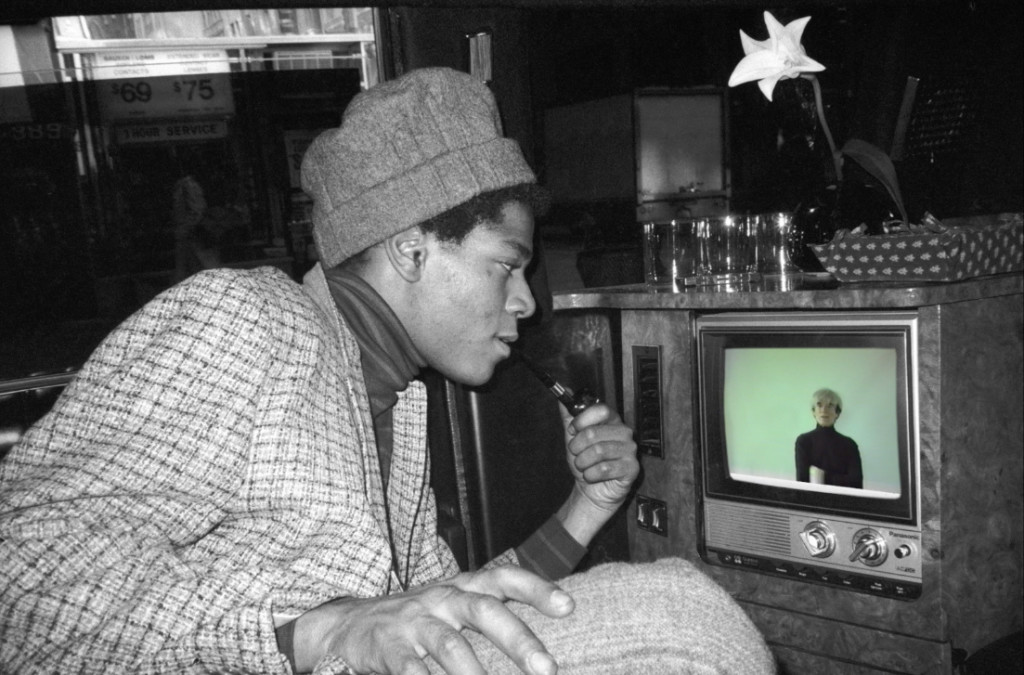 It has long been acknowledged that the most significant creation ever to come from the studios of Andy Warhol was Andy Warhol himself. Click on today’s Daily Pic to see a clip from a newly revealed video of Andy at work self-creating.

That tape, along with many others and a vast trove of Warholian photos, was recently dug out of her house by Paige Powell, one of Andy’s closest friends and followers in the 1980s. It is now on view in a lovely show from Powell’s archives called “The Ride”, at the Portland Art Museum in Oregon. One huge wall hosts three videos from Powell’s trove. (They are presented montaged inside photos of Jean-Michel Basquiat watching TV in a limo, as in my Pic; Basquiat was Powell’s boyfriend for some of her time with Warhol.) A nearby room recreates a 1984 show by Powell that featured a mass of photos of her life in New York, where she hung out with the city’s hippest culturati.

Of course, the thing about Warhol’s self-creation is that there was no point in doing the creation without an audience and documentation. Armed with video and still cameras, Powell provided both to Andy.

Powell shot the video for today’s clip in 1983, on a Fall day when the Warhol entourage was due to celebrate the 14th anniversary of his Interview magazine and its largest-ever issue – but Warhol couldn’t attend the party because he had some kind of self-help class to go to. There must have been some other, better reason for his absence, but it may have been buried too deep in Warhol’s labyrinthine subconscious for even him to spot it.

Warhol sometimes talked about the labor of putting on the “Warhol suit” of his public persona, and here he seems to have got it all brushed off and ironed. Note his black eyebrows and the black fringe died into his platinum wig – both meant to accentuate the wig-ness of the white hairpiece, thereby implying that it was being worn as a top layer of costume over thick dark hair underneath. (In fact, Warhol had succumbed to almost total baldness three decades before.) As in almost every aspect of his life, Warhol had assumed a costume in order to imply that somewhere underneath an authentic self was hiding, when in fact it was costume as far down as most people could reach.

The trademark whine was a costume; the hesitations were costume; every single “Oh great” and “Really?” was costume, sewn within years of Warhol’s arrival in New York in 1949. In private Warhol could – sometimes – come off as fiendishly smart and even eloquent. But can we simply assume that that private self was more real and true than the one he chose to present in today’s video? Maybe assuming a costume was Warhol at his most authentic.

An ancient cliché says that great art is more true-to-life than life itself. I think Warhol, one of our greatest artists, probably thought that the vision he created of himself provided a better likeness – of a strange creature named Andy Warhol – than could ever be seen in the body and mind Andrew Warhola was born with.