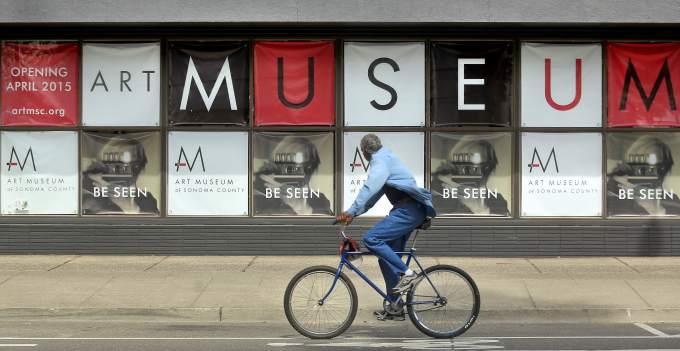 After decades of false starts and delayed dreams, the Art Museum of Sonoma County will open in early April, creating the most modern art showcase the city of Santa Rosa has ever had.

The new museum opens with an April 11 gala; its first exhibit, “Andy Warhol to Kara Walker: Picturing the Iconic,” opens the following day.

Its building is just steps away from the Sonoma County Museum, where for nearly 30 years, art shows have shared space with history exhibits. The original museum, housed in Santa Rosa’s historic Post Office building, will be reborn as the History Museum of Sonoma County.

For most of its history, the Sonoma County Museum led a double life. Museum leaders initially interested primarily in local history saw, within the first few years, a need to exhibit art as well.

Now the entity has been reborn as twins, with one museum for art and one for history located at opposite ends of the same block of Seventh Street in downtown Santa Rosa.

“It really is a new day. It’s not just business as usual. The museum is emerging now as a professional entity, with regard to artistic presentation,” said Henry Beaumont, chairman of the 27-member board of directors that will oversee both museums.

The new Art of Museum of Sonoma County will occupy the newly remodeled back half of former Conklin Brothers flooring company warehouse at Seventh and B streets.

The History Museum of Sonoma County will take over the existing county museum building that served as the downtown Santa Rosa Post Office from 1910 to 1965. The structure was built at Fifth and A streets and later was moved to its present site, reopening as the Sonoma County Museum on Jan. 12, 1985.

“The post office building is a lovely structure, but we outgrew it,” said Diane Evans, executive director of the Sonoma County Museum since 2008. “The new space is designed to be a true art museum.”

Santa Rosa artist and arts activist Mario Uribe sees the opening of the Art Museum of Sonoma County as a significant breakthrough in the city’s artistic growth.

“The museum has been struggling forward, certainly for the last decade or so,” Uribe said. “It has had dreams about expanding and building a new museum, I think because everyone recognizes the potential that Santa Rosa has for a bigger museum and more important exhibits.

“This is a good move. This will be the best exhibit space in town.”

The almost $1 million Art Museum of Sonoma County project was paid for with money previously raised for expansion plans that later fell through and a portion of the $5 million granted to the museum in 2000 by Norma and Evert Person, Evans said.

It represents the first phase of what is meant to be an ongoing project. Eventually, the entire Conklin Brothers structure will be rebuilt and expanded to two stories.

“The long-term goal is to build it into a real museum, with better lighting, humidity and temperature control, room to house permanent collections and places for the community to meet,” Evans said.

The quest to create dual museums for art and history has been long one. Not long after the Sonoma County Museum opened, it began to acquire its own art collection, most significantly a number of 19th century landscape paintings by Thomas Hill, William Keith and others, donated by Ivan and Elvira Hart.

“Within a year or two, the mission became to split the museum into art and history museums,” Evans said.

Meanwhile, the art collection continued to grow. In 2001, Tom Golden of Freestone donated his collection of some 125 drawings, sculptures, collages and photographs by world-famous conceptual artists Christo and Jeanne-Claude, remembered in Sonoma and Marin counties for their ‘70s project “Running Fence,” with white nylon fabric stretching more than 20 miles cross-country to Bodega Bay.

In 2005, the Museum of Contemporary Art gave up its space at what is now the Wells Fargo Center and merged with the Sonoma County Museum.

“In the early 2000s, a capital fund-raising campaign was launched and a nationally known architect, Michael Maltzan of Los Angeles, was hired to design a new museum to be built around the post office building,” Evans said.

That project never got off the ground, but the dream didn’t die. In 2010, developer Hugh Futrell and his partners proposed an ambitious plan for the former AT&T building in downtown Santa Rosa that included residential units, a space for the Sonoma County Museum and a restaurant on the first floor.

But the post-recession lending environment and the demise of the city’s redevelopment agency caused setback after setback. The museum ultimately pulled out of the project in 2013.

Meanwhile, the Sonoma County Museum in 2001 had purchased the neighboring building occupied by Conklin Brothers, which continued to do business there until relocating to Todd Road in 2013.

Throughout its long effort to expand, the Sonoma County Museum made other improvements, becoming affiliated in 2009 with the Smithsonian Institution in Washington, D.C., one of 190 affiliates in 40 states. That entitles the museum to show the Smithsonian’s traveling programs and get advice from its experts.

In 2011, it also opened an adjacent outdoor sculpture garden at Seventh and A streets.

“We can host traveling exhibitions. It really expands the kind of work we can have on exhibit,” she said.

Next up is an exhibit of paintings by Southern California artist Robert Williams, who first gained fame as a underground cartoonist in the 1960s, producing Zap Comix with Robert Crumb and others.

One afternoon earlier this year, with reconstruction under way, Evans looked around the new exhibit space and smiled broadly.

“We didn’t know it was going to be this nice until we got in here and started working,” she said.