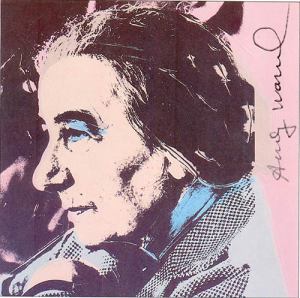 Displayed here is a signed reproduction by Andy Warhol of Golda Meir from his famous series “Ten Portraits of Jews of the Twentieth Century.” With each of the ten, the artist started with a photograph; enlarged the print; affixed scraps of colored paper; added his own line drawings to the subject’s face; and silk-screened the result. Amid the wild color and mad geometric shapes, Warhol’s own lines in the Meir piece exhibited here may best be seen in his interpretation of the curved line in Golda’s hair.

The series, which premiered at the Jewish Community Center of Greater Washington in March 1980, toured synagogues, Jewish community centers, and regional museums to great public acclaim due, at least in part, to a sense of pride that one of America’s most famous artists had chosen famous Jews as his subject. The Ten Jews marked the first time Warhol featured a series on a particular race or religion, and it was also the first time he made portraits of subjects who had died.

Warhol (1928-1987) had gained notoriety in the early 1960s as a Pop Art pioneer with a series of paintings of “Campbell’s Soup Cans” and his images of celebrities such as Marilyn Monroe; he developed the silkscreen style and used mass production techniques to depict common commercial products. His celebration of popular culture, fame, and commercialism, and his attacks on contemporary icons, shocked the art world and his work came to be characterized as an approach to art and culture that took an almost perverse pleasure in critiquing normative artistic models and rules.

The original idea for the Ten Jews project came from Warhol’s dealer, Ronald Feldman, and the actual choice of the individual Jews was directed by Feldman with assistance from Israeli art dealer Alexander Harari and Susan Morgenstein, director of Jewish Community Center of Greater Washington, who provided the relevant biographical details about each individual.

Warhol was shown hundreds of old photographs and abundant background information on each before he finally chose his ten: Sarah Bernhardt, Louis Brandeis, Martin Buber, Albert Einstein, Sigmund Freud, George Gershwin, Franz Kafka, the Marx Brothers, Golda Meir, and Gertrude Stein. Warhol chose these ten not because of the role they played as 20th century Jews but rather, as he explained, “Because I liked the faces.”

Feldman, a lawyer who became a well-known art dealer, first encountered Warhol through a fortuitous meeting at Feldman’s gallery. When Warhol surprised and delighted him by asking for his thoughts regarding a possible joint collaboration, his initial response was to suggest a series of ten American presidents, an idea Warhol quickly rejected. But when Feldman later came up with “Ten Jews of the Twentieth Century,” Warhol responded: “Great…but who are they?”

Feldman and Warhol narrowed the list down from over one hundred Jews. They had quickly selected three who would be featured in the exhibit, but the selection of the others took some time. Jews who were considered, but not ultimately selected, include Woody Allen, Saul Bellow, David Ben-Gurion, Marc Chagall, Anne Frank, and Barbra Streisand. Bob Dylan, who would have been selected, was rejected when he proclaimed himself a born-again Christian.

Though artists commonly immerse themselves into the subject matter of their work, there is no evidence Warhol ever cared about Jews or Judaism or that he ever expended any effort to delve into Jewish custom, culture, and practice. For example, Feldman reports that, throughout the project, Warhol, a Catholic, never discussed Judaism, nor did the artist ever attend a Shabbat dinner or a Jewish holiday meal.

In creating his “Ten Jews,” whom he frequently characterized as “Jewish geniuses,” Warhol readily admitted that his primary motive was financial. He had been saturating the market with tens of thousands of reproductions and prints, almost all of which featured less-than-serious subjects, and his popularity had deteriorated. Whether or not he purposely turned to serious subject matter as a means to “rehabilitate” his reputation, the “Ten Jews” project presented substantive cultural figures, all of whom embodied significant social change.

Though his essential purpose was, and always remained, commercial, it is ironic that at the very time Warhol was mocking Modern Art through a celebration of superficiality, he turned these Jews into exemplars and stars and, albeit unwittingly, educated the public regarding the considerable Jewish influence on 20th century culture and philosophy.

Commentators noted that instead of transforming the commercial into the artistic, which had always been Warhol’s forte (a la Campbell’s Soup, Marilyn Monroe, etc.), the artist had turned ten great Jewish icons into something commercial and ordinary. Not atypical was a vicious review by New York Times critic Hilton Kramer, who wrote:

The way it exploits its Jewish subjects without showing the slightest grasp of their significance is offensive – or would be, anyway, if the artist had not already treated so many non-Jewish subjects in the same tawdry manner…. To the many afflictions suffered by the Jewish people in the course of their long history, the new Andy Warhol show at the Jewish Museum cannot be said to make a significant addition. True, the show is vulgar. It reeks of commercialism and its contribution to art is nil.

Despite the poor reception by critics, however, Warhol calculated that upper middle class Jewish and their cultural institutions would purchase the silkscreen editions, effectively “buying their way into the chic avant-garde,” and he was proven correct: the public, particularly upper echelon Jewish art patrons, responded enthusiastically.

Ironically, his treatment of the ten Jews was taken more seriously by a wider audience than almost any of his previous substantial artistic output. Moreover, history has proven kinder to Warhol’s “Ten Jews”: the series is now viewed more seriously and as less shallow and artificial. Many former critics have come to recognize that Warhol had simply refused to romanticize or personalize his subjects, though they were transformed into “famous Jewish people” when thrust into the consciousness of the Jewish community through the artist’s own obsession with fame and fortune.

Some contend – unconvincingly, in my opinion – that years before his “Ten Jews” became famous, Warhol had rendered an anti-Semitic depiction of Jews in “Before and After” (1962), a lithograph he created based on an illustrated newspaper advertisement for cosmetic nose surgery he had drawn years earlier. The work, which is exhibited at the Museum of Modern Art, depicts two identical female profiles; on the left, however, the young woman sports a monstrous hooked beak evocative of a cartoon-cliché witch’s proboscis, while on the right she is seen, post-rhinoplasty, with a perfect, smooth nose.

Those who see anti-Semitism in “Before and After” claim that Warhol sought to portray “a nose job striving for assimilation.” At a time when many Jews were seeking surgical solutions to persecution, thousands of American Jewish teens saw a nose job as a prerequisite to acceptance among their peers. However, there is nothing at all in “Before and After” to evoke a specifically Jewish subject, nor did Warhol ever make any such suggestion. It should go without saying that there are non-Jews with unattractive noses, and I would argue that the very people who see the hooked nose as inherently Jewish are themselves engaging in anti-Semitic stereotyping.