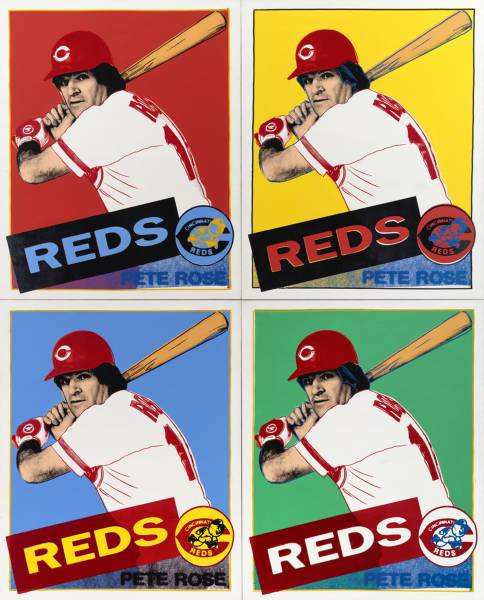 The new Cincinnati Art Museum exhibition, Up at Bat: Warhol and Baseball, brings Warhol’s three known paintings of baseball players, each of whom rose to the level of pop celebrity during his lifetime, together for the first time on record.

The exhibition is on view April 11 – Aug. 2, with a preview opportunity April 7 – 10. Up at Bat: Warhol and Baseball will feature the 1985 screen print on canvas of Pete Rose, commissioned by the Cincinnati Art Museum in anticipation of Rose breaking Ty Cobb’s record of 4,191 hits; Baseball, 1962, on loan from the Nelson-Atkins Museum, portraying Roger Maris; and the 1977 portrait of Tom Seaver, who pitched his only no-hitter as a member of the Cincinnati Reds, lent by the Andy Warhol Museum.

Warhol’s image of “Charlie Hustle” went on display at the Cincinnati Art Museum on Sept. 10, 1985, a day before Rose’s famous, record-breaking hit. The larger-than-life four-paneled painting was derived from a photograph by Gordon Baer and styled like a classic baseball card.

“This exhibition helps us see Warhol in a new way, recognizing the pop aspect of modern celebrity athletes,” said Kitchin, “Bringing these images from the 1960s, 1970s and 1980s together for the first time gives us great insight into Warhol work and subjects.”

Admission to the Cincinnati Art Museum and Up at Bat: Warhol and Baseball is free.

The exhibition is located across from the new Rosenthal Education Center (REC), off of the Art Museum’s Great Hall.

General admission to the Cincinnati Art Museum is always free. The museum is open Tuesday – Sunday, 11 a.m. – 5 p.m. and is closed Monday.