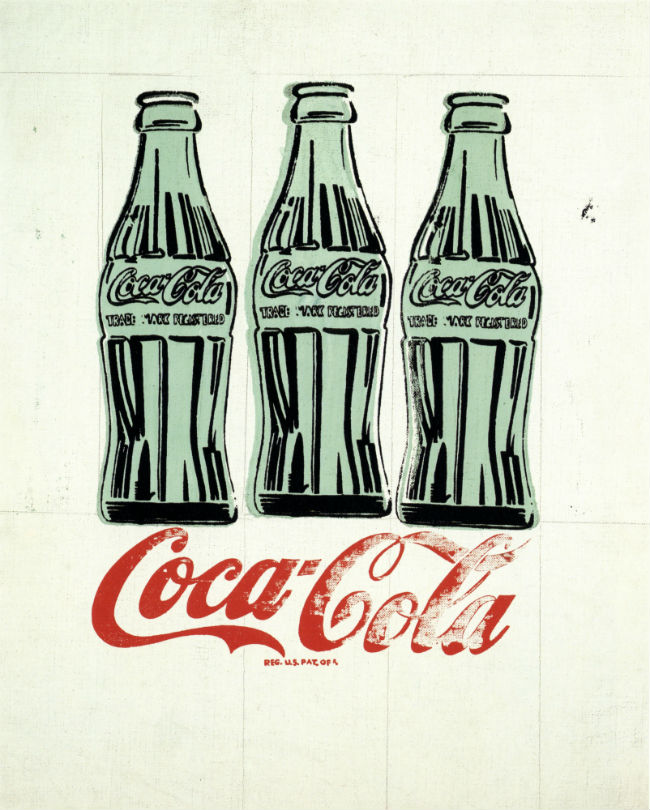 In the 1960s Andy Warhol turned the seemingly ordinary into art, taking everyday objects like Campbell’s Soup cans and Brillo pad boxes and screen printing their images onto canvases or turning them into sculptures. Coca-Cola also served as one of Warhol’s muses, and to celebrate the 100th anniversary of the Coca-Cola bottle, the High Museum of Art in Atlanta is currently displaying a number of Warhol’s Coca-Cola pieces as part of the exhibition The Coca-Cola Bottle: An American Icon At 100, which is on display through October 4, 2015.

“He was working in the early ‘60s, and he was trying to figure out who he wanted to be as an artist, and he was fascinated by popular culture, marketing, and advertising, and consumer and a world that was really just starting to think about Mad Men — the ‘50s, advertising starts kicking off in a big way and he’s inspired, but he’s living in a world of Abstract Expressionists, so he’s trying to decide who he should be,” said High Museum curator Julia Forbes. “He starts taking all these advertisements, clipping them out, collaging them together, and then he starts making paintings, and one of the first experiments he starts doing is with Coca-Cola.”

Warhol used Coca-Cola as a subject in his art for four decades, beginning in the 1950s with an ink-on-gouache drawing of a Coca-Cola bottle with a pair of legs. Then in the ‘60s, he added some color, tearing out Coca-Cola ads from magazines to use them in collages, and silk screening three bottles on linen. In 1966 he placed a Coca-Cola bottle on screen tests with Lou Reed and Nico, before creating a sculpture of silver spray paint-covered Coca-Cola bottles in a wooden crate in 1967.

In the ‘80s Warhol photographed Coca-Cola memorabilia, and in 1985, he spilled actual Coca-Cola on paper when Time magazine commissioned him to create a cover for what would be Coca-Cola’s unpopular new formula. The news magazine opted not to use the pieces, probably prompting Warhol to think that the Coca-Cola bottle makes for better art than Coca-Cola itself.