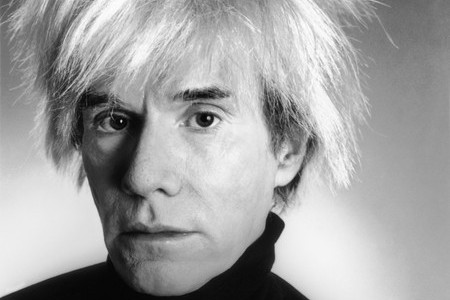 Andy Warhol was born Andrej Warhola Jr. on August 6, 1928, in Pittsburgh, Pennsylvania. His parents, Andrij Varhola and Julia Zavacka, were immigrants from Mikova (formerly Miko), a small provincial district in Northeast Slovakia. Andrij Varhola americanized his name to Andrew Warhola. He worked as a coal miner.

Andrew and Julia’s first child, who was born in Slovakia, died before they immigrated to the United States. They had two children before Andy — Paul (Pavol) and John (Ján). They raised their children as Catholic.

In the third grade, Andy contracted Sydenham’s disease, a condition affecting the nervous system that causes involuntary jerking primarily in the face, hands and feet. Because he was so often bedridden, Andy lacked friends and developed a close relationship with his mother instead. His frequent hospitalization caused him to develop a fear of hospitals and doctors. While confined in bed, Andy listened to the radio, drew pictures, and collected photographs of celebrities.

At age thirteen, before Andy enrolled in high school, his father passed away in an accident. Andy attributed this traumatic experience (coupled with his sickly childhood) as significant factors in the development of his personality, skills and interests.

After graduating from Schenley High School in 1945, Andy intended to study art education at the University of Pittsburgh in the hopes of becoming an art teacher. However, he studied commercial art at the Carnegie Institute of Technology. At the institute, he was highly involved in school activities, joined the school’s Modern Dance Society, Beaux Arts Society, and acted as the art director for the campus art magazine, Cano. His first two published artworks are believed to be the illustrated cover and spread he produced for the magazine. In 1949, Andy earned his Bachelor’s Degree in Pictorial Design and moved to New York City a few months after.

Andy’s initial fame came from his eccentric watercolor and ink drawings for shoe advertisements, some of which were featured in the Bodley Gallery in New York. This caught the attention of RCA Records, who hired him to design album covers.

Andy’s early technique reflected the fundamental processes of screenprinting. Although Andy used photographs later on to create silkscreens, his commercial prints featured hand-drawn images. His innovative method involved applying ink to paper, then blotting while it was still wet. This created a loose effect that made his shoe prints popular, as well as serving as a rudimentary version of the more advanced technique he adopted later.

In the mid-1950s, Andy began exhibiting his art. Initially starting off at the nearby Hugo and Bodley Galleries in New York, Andy eventually graduated to cross country exhibitions at the Ferus Gallery in Los Angeles (1962). The 1960s saw the increasing popularity of Andy’s pop art, which had a ripple effect on his subsequent work in film.

In 1962, Andy hosted his first solo exhibition at the Stable Gallery for nearly the entire month of November. This exhibition featured Marilyn Diptych, 100 Soup Cans, and 100 Coke Bottles, which are amongst Andy’s most recognized works. It was at this exhibition that Andy met John Giorno, who starred in the artist’s debut film Sleep in the following year.

After the success of his Stable exhibition, Andy began making more prints of American symbols from celebrities to newspaper headlines to the iconic Coca-Cola bottle. It was in 1963 that he opened the first location of his studio, The Silver Factory, which shifted several times between 1963 and 1984.

Once The Factory opened, Andy’s entourage of musicians, artists, actors, writers and other celebrities grew. His work became increasingly popular, but also controversial.

In 1962, The Museum of Modern Art in New York hosted a symposium dedicated to pop art, such artists as Andy Warhol, Lichtenstein, and Rauschenberg were attacked for surrendering to American consumerism. Andy’s reception harbored a similar tone with critics loudly declaring their disdain for his “sellout” work. Throughout the 1960s, it became increasingly clear that the zeitgeist was shifting, and Andy was at the helm of the change.

The landmark event was The American Supermarket, a exhibit in 1964 held at Paul Bianchini’s Upper East Side gallery. The show was stylized as a typical supermarket, but everything (produce, meat, shopping carts, signs and more) were created by six prominent pop artists of the time, including Andy. The exhibit was one of the first and certainly the most prominent of its kind, confronting the public with a blend of pop art’s consumerist nature and the question of what qualifies as art.

As a result of his assistant-dependent artistic process while working as a commercial illustrator, Andy’s fine art period was also characterized by the use of several assistants. This was a controversial aspect of his work, as many questioned the value of his work and if it were mass-produced. Musician John Cale of the Andy-produced band The Velvet Underground famously said, “It wasn’t called The Factory for nothing.”

The most significant collaborator at The Factory was Gerard Malanga who assisted Andy during his most famous period in his career. Other assistants included Freddie Herko, Ondine, Ronald Tavel, Mary Woronov, Billy Name and Brigid Berlin.

It was during this period that Warhol cultivated his entourage of “Superstars” who starred in his films and assisted him at The Factory. His connection to the underground art scene was revealed through works done with the likes of John Giorno and Jack Smith.

In 1968, writer Valerie Solanas shot Andy and curator Mario Amaya at The Factory. Solanas had been a marginal figure at the studio, appearing briefly in Factory films and penning radical tracts and scripts that never garnered much attention from Andy or his superstars.

Although Solanas is often called a “radical feminist,” a more appropriate term would be “misandrist”. Her most popular work at the time was The S.C.U.M. Manifesto, which advocated for the elimination of men from the human population.

Amaya was only minorly injured in the shooting, but Andy barely survived it. At a local hospital, surgeons opened his chest and massaged his heart to stimulate movement. For the rest of his life, Andy suffered physical and psychological effects from the shooting, including having to wear a surgical corset.

Solanas claimed her murder on Andy having too much control over her life. She was arrested the day after the attempt, facing three years under the control of the Department of Corrections. After the shooting, The Factory became more controlled and only a select group was allowed in.

After the assault, Andy said “Before I was shot, I always thought that I was more half-there than all-there — I always suspected that I was watching TV instead of living life. People sometimes say that the way things happen in movies is unreal, but it’s actually the way things happen in life that’s unreal. The movies make emotions look so strong and real, whereas when things really do happen to you, it’s like watching television– you don’t feel anything. Right when I was being shot and ever since, I knew that I was watching television. The channels switch, but it’s all television.”

Solanas’ attempt on Andy’s life greatly affected his art. The 1970s ushered in a different era of his work. Much of his visual art became centralized on wealthy patrons as Andy dedicated his sincerest efforts to publishing. He found Interview magazine on the cusp of 1970, and published The Philosophy of Andy Warhol in 1975.

Andy’s socialization became more prominent during this period as well. He frequently visited Max’s Kansas City and Studio 54 (both located in New York City), where he was described as shy and quiet, meticulously observing his surroundings instead of taking part in the party he attended.

In 1979, Andy founded the New York Academy of Art with his longtime friend Stuart Pivar. This is an early demonstration of Warhol’s inclination towards mentorship in the 1980s.

Before he pursued commercial art at the Carnegie Institute, Andy intended to study art education with hopes of becoming an art teacher. Following his founding of the New York Academy of Art, Andy maintained his fame in the 1980s through mentorship rather than actual production of work.

Critics attest that this period of Andy’s art was nothing more than business — they claimed that the work in question was facile and superficial. This is best exemplified by Andy’s “Jewish Geniuses” series, which debuted in 1980. Andy was uninterested in Judaism or those who practiced it, writing in his diary that “they’re going to sell”. Critics declared that the portraits had no indication of depth within the subjects.

On the other hand, others hail this very series as “the most brilliant mirror of our times”, contending that Andy captured the very essence of the era. Much of Andy’s portfolio in the 1980s was categorized by this sort of divisiveness: was Andy selling out or making social commentary? Even today, art historians and critics are in debate.

Andy’s fame in the 1980s came from his affiliation with several prolific young artists, whom he mentored and guided. Among these artists who categorized themselves as neo-expressionists or transavantgarde were Jean-Michel Basquiat, Julian Schnabel, David Salle, Francisco Clemente and Enzo Cucchi.

Following a routine gallbladder surgery, Andy was making good recovery before dying in his sleep after sudden postoperative heart failure. Because of Andy’s fear of hospitals and doctors (stemmed from his childhood), he delayed having his recurring gallbladder problems checked, which many believe is what induced his postoperative arrhythmia (complication after surgery). His family sued the hospital for malpractice, which was settled out of court, and received an undisclosed amount of money.

Andy’s funeral took place on February 27, 1987 in his hometown of Pittsburgh at St. John the Baptist Byzantine Catholic Cemetery. He was laid in the coffin wearing his signature wig and sunglasses, holding a small prayer book and a red rose. The eulogy was delivered by Monsignor Peter Tay, and Yoko Ono and John Richardson were speakers. Paige Powell dropped a copy of Interview magazine, an Interview t-shirt, and a bottle of Estee-Lauder’s perfume “Beautiful” into the grave. Andy was buried next to his parents.

Over 2,000 people attended Andy’s memorial service held at St. Patrick’s Cathedral in New York on April 1, 1987. A following reception was attended by friends and colleagues from around the world.