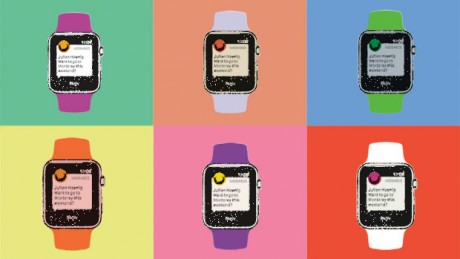 There’s a line from Andy Warhol about America’s flavour of capitalism, usually summed up as “the President drinks the same Coke as you do”, and I was reminded of it by a friend on Twitter this morning in the context of the Apple Watch.

Here’s the full quote: “What’s great about this country is that America started the tradition where the richest consumers buy essentially the same things as the poorest. You can be watching TV and see Coca-Cola, and you know that the President drinks Coke, Liz Taylor drinks Coke, and just think, you can drink Coke, too. A Coke is a Coke and no amount of money can get you a better Coke than the one the bum on the corner is drinking. All the Cokes are the same and all the Cokes are good. Liz Taylor knows it, the President knows it, the bum knows it, and you know it.”

It’s a fascinating prism to look at the Apple Watch through – so long as you’ll indulge me by ignoring the elephant in the room, that the Apple Watch starts at £299 and so is a hugely extravagant device by global standards that few bums on the corner will have strapped to their wrist.

Remember, of course, that the £13,500 Apple Watch Edition is functionally identical to the £229 Apple Watch Sport. Identical. And so you might say Warhol’s quote still holds; rich people will get exactly the same functionality from their rose-gold Apple Watch as you will from your aluminium one.

Yet there’s nuance here. I couldn’t have written above “rich people will get exactly the same experience from their rose-gold Apple Watch as you will from your aluminium one” because of course opting for a vastly more expensive and luxurious model changes the context, and the experience changes with it.

We just have to tweak Warhol a bit. The basic message remains exactly the same, but now we’re talking about the Coke itself being the same no matter who drinks it, but just as the aluminium, steel and gold Apple Watches wrap identical functionality, the Coke gets packaged up inside gold and steel cans in addition to the normal aluminium cans.

You might say: so what? It’s still the same Coke. If you want to pay a few grand for a can which contains the same liquid – the same actual product that I am going to ingest – as I have here in a can made from a different metal and which I bought for a quid, you’re a moron but you go, girl.

That’s the brilliance of the parallels between the Apple Watch and Coke, though. For one thing, that’s just market forces, and by offering people with vast sums of money an option that they’ll buy for a host of reasons – among them desirability, exclusivity, conspicuousness and just because they can – Apple isn’t diminishing the cheaper variant.

Likewise, while the innards of the Apple Watch Edition are identical to the Watch and Watch Sport, the experience of using each will be slightly different both objectively – gold being heavier, for example – and subjectively, such as how you’d feel using a sapphire screen versus a glass one, even if you’d be hard-pressed to tell them apart.

Still, a little stretched though Warhol’s point might have been by the Apple Watch, I think it still applies. If there was any difference in the functionality between the watches, even if it was something as simple as the Edition models having double the storage as the others, you could argue that paying more money got you something better, and that thus the egalitarian nature of this certain kind of capitalism he celebrated would be compromised.

As it is, while someone spending many thousands of pounds on an Apple Watch Edition will get a subtly different experience to someone buying an Apple Watch Sport, they literally and specifically won’t be able to do a single thing with theirs that others can’t.

And that’s one reason why I pre-ordered a Sport this morning.