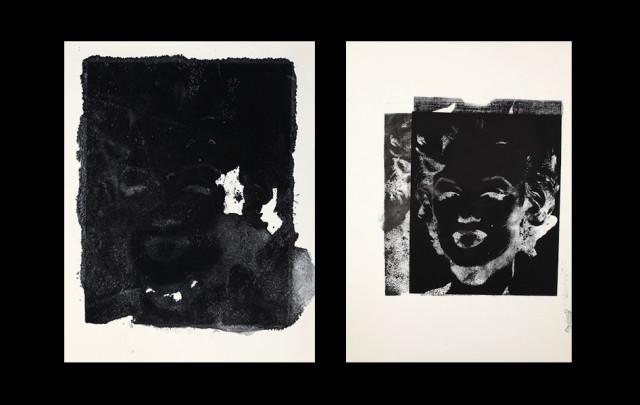 Of course it’s fitting (and hardly an accident) that Andy Warhol: Stars of the Silver Screen, a show dedicated to Warhol and Hollywood, should be happening in the exhibition space of the Toronto International Film Festival. Curators at the Warhol museum in Pittsburgh, who organized the display, have packed it absolutely full of cinephilic objects and artworks and ephemera, all made or collected by Warhol himself, packrat nonpareil. Wall after wall heaves with headshots of stars. Vitrine after vitrine comes stuffed with movie scrapbooks and magazines and old costume items. The cinematic cornucopia is utterly bewildering, even vaguely dismaying. And that’s exactly how it needs to be.

Warhol has often been portrayed – especially by Warhol himself – as some kind of chipper movie fan, flitting from star to star. But, as with everything Warholian, Andy Warhol Takes A Dark View Of Hollywood. Today’s Daily Pic hints at it: The almost illegible black smudge of this Marilyn, from his 1978 “Retrospective and Reversal” series, is just a more open revelation of a darkness that was at the heart of his first images of Marilyn, silkscreened just weeks after the star’s sorry end. One of those is a repeating image of the dead woman’s kissable lips, amputated from the rest of her body; it is as chilling as it is cheery. (It’s not at TIFF)

From the moment Warhol painted his first 32 Campbell’s Soups, quantity was as much about surfeit as plenty for him. Even the Hollywood scrapbook at TIFF, which he himself put together as a kid of 10 or 12, has as many also-rans in it as genuine talents; the collecting mattered as much as what got collected. Twenty years later, Warhol the artist realized that accumulation mattered as much to American culture as what got piled up – and this was just as true of celebrities as of commodities. It was also true of art, as Warhol made clear by turning out a stream of almost-identical images. By the 1970s, there’s a calculated similarity between Warhol’s own endless portraits of semi-famous people and the endless flow of images and stars out of Hollywood. Both end up feeling hollowed out.

One reason for Warhol’s vexed relationship with stardom may have to do with his homosexuality. Warhol came of age – and out – in the late 1940s, when being gay was either illegal or universally shunned. That made the American mainstream permanently unavailable to him; he could only ever be on its margins, looking on at a queer angle. That was also the angle he had on Hollywood. The first adult expression we get of his interest in movies takes the form of a series of altered postcards of Greta Garbo that he sent out to various gay friends and crushes, in 1951 and ‘52. The Garbo image on the cards came from a movie called Camille – which he would have just seen reenacted by a group of gay friends in drag.

Despite the flippant impression he left – and wanted to leave – Warhol was a tremendously smart and savvy person. He knew perfectly well that, for all its instant and real appeal, the American institution of stardom is fundamentally superficial, coming close sometimes to pernicious. He also knew perfectly well that that, to make profound art, he had to capture and concentrate that superficiality, and hint at its malevolence. Today’s Pic does that.