Home Scoop Andy Warhol is Shot By Valerie Solanas in 1968 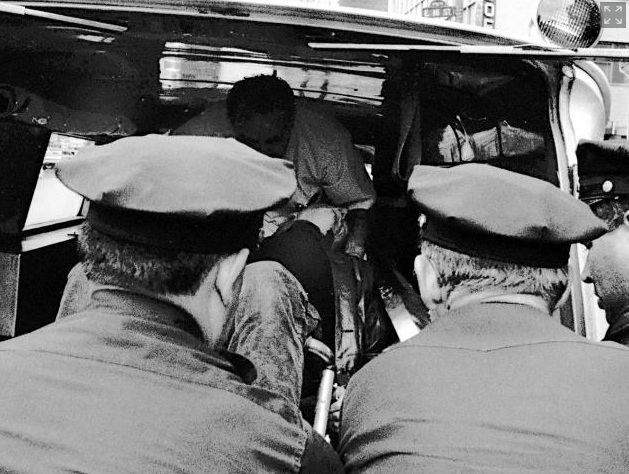 (Originally published by the Daily News on June 4, 1968. This story was written by Frank Faso, Martin McLaughlin, Richard Henry.)

Andy Warhol, 36-year-old pop artist, maker of underground movies and darling of the avant-garde set, was critically wounded at 4:30 p.m. yesterday when one of his female film stars barged into his sixth-floor Union Square office and, without a word, fired a barrage of bullets at Warhol and a business associate.

Of the four shots fired at close range, one .32 caliber bullet hit Warhol and another inflicted a relatively minor wound on the associate.

Warhol underwent five and a half hours of emergency surgery by a team of four doctors at Columbus Hospital. He was given a “50-50 chance to live.”

Schmalix, 22 and a cop only since February, said she handed him a .22 revolver and a .32 automatic and told him: “The police are looking for me. I am a flower child. He had too much control over my life.”

Refuses to Give Address

Booked at the E. 21st St. station on charges of felonious assault and possession of a dangerous weapon with intent to kill, the short-haired brunette declared that she lived “nowhere.”

When asked who she was, she replied: “I’m really a writer,” and said she was a 1962 University of Maryland graduate. Asked to explain the shooting, she stated: “There are many involved reasons. I have written manifesto of what I am and what I stand for.”

The bullet that hit Warhol twisted crazily through his abdomen and chest, wreaking much damage. It entered through the left lung, hit his spleen, stomach, liver and esophagus before penetrating the right lung and emergency from his right side. X-rays established that only one slug had caused the damage, according to the hospital’s medical director, Dr. Massimo Bazzini.

Also wounded by one shot, in the attack witnessed by four other astonished persons, was Mario Amaya, 34, a visiting art dealer editor from London. He was hit near his left hip.

Warhol was at the desk of his office nicknamed The Factory and headquarters of his Films Inc., 33 Union Square West. Near him was Amaya. Grouped near the elevator end of the Swedish-studio-type chamber were Paul Morrissey and Fred Hughes, two Warhol workers, and two other persons.

Miss Solanas, who had been at the studio without seeing Warhol earlier in the afternoon, got off the cage-type elevator at the opposite end of the room from Warhol.

Her entry did not create a stir. Casual in yellow blouse and tan slacks covered by brown jacket, she sauntered toward Warhol, who was talking on a phone and opening mail.

She drew a gun and began firing, first at Warhol and then at Amaya.

Before the others could stop her, she ran back to the elevator, started the car down and escaped.

The two victims were rushed to the hospital. After treatment, Amaya emerged, carrying his bloody shirt and with bandages on his torso. One bullet had entered his left side, above his hip, gone around his rib cage and emerged from his back, after narrowly missing his spinal cord.

“I Was Very Lucky”

Amaya, a short, dapper man who had come to New York to persuade Warhol “to do a retrospective exhibition in London,” said: “I was very lucky.” Amaya is a modern-art promoter and edits a magazine, Art and Artists. A resident of London’s Fashionable South Kengsington section, he has been staying at 345 E. 52d St. here. He commented “Warhol has a lot of unusual friends.”

Police had put out an alarm for the short, thin actress, whose last known address was the Chelsea Hotel, 222 W. 23d St., between Seventh and Eighth Aves. It is an oldtime literary and artistic hangout that was the locale of “The Chelsea Girls,” one of Warhol’s most famous films.

Miss Solanas, who starred as the “Girl on the Staircase” in another famous Warhol flick, “I, a Man,” was roundly denounced by Warhol friends who gathered in a hospital waiting room with Andy’s mother, Julia.

Mrs. Warhol, with whom the artist had been sharing an apartment at 1342 Lexington Ave., at E. 89th St., wept and talked to herself in a Slavic language. After a while, hospital attendants put her in a wheelchair and took her to a private room. She has a heart ailment.

Hospital spokesmen said that there was nothing seriously wrong with the mother, that they wanted her away from the excitement of Andy’s friends.

Two of them indicated that Valerie might have shot their hero because he had not filmed a script that she kept thrusting on him, a script with an obscene title.

“She is a strange character and she’s been bothering Andy a long time, part of which I read and which was so vile and filthy it turned my stomach,” one woman friend said. “Andy kept turning her off, but he was just too nice a guy to give her a complete brushoff.”

“I know for a fact she’d been bugging him for a long time to make a movie out of her script,” a male friend said.

“This underground movie world is a mad, mad world with a lot of mad people in it. Maybe this girl, Valerie, was mad herself.”

Another said Valerie has a strong, masculine will and added: “I hated her.”

About 20 agitated Warhol friends milled about. A few men who wore business suits said they were art gallery people. Other friends wore the leather, lace, denim and beads of the underground. One had a bathtub plug on a chain around his neck.

An actress known as Viva, who had been comforting Warhol’s babushka-wearing mother, insisted calmly: “He isn’t going to die.”

Viva said she had been talking with Warhol by phone when he was shot. “I heard five shots and a lot of screaming,” Viva related. “I heard Andy screaming. I thought it was a joke, then the phone was dropped.”