Home Scoop Andy Warhol Hung Out With His Mentor in This $539,000 Pad 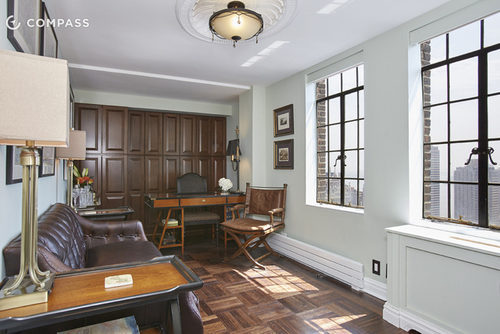 A petite one-bedroom co-op with hardwood floors and a kitchen that doesn’t fit a full-size fridge entered the market last week asking $539,000. The apartment on East 42nd Street would seem rather unexceptional—a Six-Digit Club, perhaps—but for the fact that Pop Art icon Andy Warhol used to frequent it. Until 2007, it was owned by Tina Fredericks, mentor to Warhol and whom, when she was the art director at Glamour in 1949, is largely credited with kickstarting Warhol’s career by commissioning illustrations from the burgeoning artist and buying one of his earliest works, a sketch of an orchestra. As she said:

I was instrumental in launching him on his meteoric journey—in the right spot at the right time. Does that make me the Mom of Pop? … The big black portfolio didn’t have much in it: some nude figure studies, some flowers, and a charming abstraction of an orchestra playing. Black and white circles—the musicians’ heads—sketched in blotted lines and repeated all over the paper, with multicolored accents slapped around to enliven the drawing even further. I was enchanted, and thought it would be perfect for the nursery I was planning. “How much would you want for this?” I asked, and in his shy, breathy way he immediately whispered, “Oh… you can have it!”

In September 2014, the couple that bought it from Fredericks sold it to interior designer Kittie Lonsdale for $388,000. She and her husband David sure are turning it around fast.