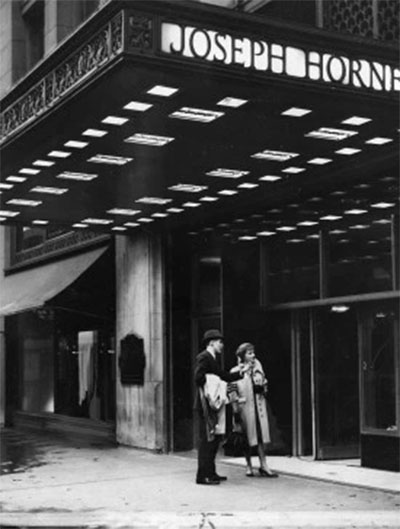 Andy Warhol was a college junior studying art at Carnegie Tech in the 1940s when he landed a part-time job designing windows for the Joseph Horne Co. in Downtown Pittsburgh.

George Arnold, a local dean of visual design who worked at Horne’s from 1982 to 1992, said longtime Horne’s employees vividly recalled the aspiring artist.

The skinny young man wore such raggedy clothes that some Horne’s employees asked their wives to assemble care packages of spare shirts, pants and shoes to give to Warhol, whose name back then was Warhola.

“He would be very appreciative and grateful,” Mr. Arnold said, adding that Warhol cut the sleeves off the shirts and painted the shoes silver before wearing them to work at the department store.

After moving to New York in 1949, Warhol made commercial art and also designed windows for Bonwit Teller. In 1961, Warhol hung five of his pop art paintings behind mannequins in a Bonwit Teller window. That display was reproduced for a 1997 traveling exhibition called “The Warhol Look: Glamour, Style, Fashion,” which was exhibited at The Andy Warhol Museum in Pittsburgh in 2000.

You can still appreciate the art of window display by peering into The Andy Warhol Museum’s three windows on Sandusky Street on the North Side. The current installation, inspired by Warhol’s career as a window designer, is called Exposures and was done by local artist Elizabeth A. Rudnick.

Warhol’s window displays were also part of a traveling exhibition called “Success Is a Job in New York … The Early Art and Business of Andy Warhol” that was shown at the Carnegie Museum of Art and curated by Tom Sokolowski, former director of The Andy Warhol Museum.

Despite widespread efforts to find them, no one has ever seen images of Horne’s windows created by Warhol, Mr. Sokolowski said.

Despite that missing visual history, fans of the vanishing department store can visit a website called departmentstoremuseum.blogspot.com. And people who wish to better appreciate this ephemeral art form can buy “Dreams Through the Glass: Windows From Bergdorf Goodman,” a 2003 volume by Linda Fargo.