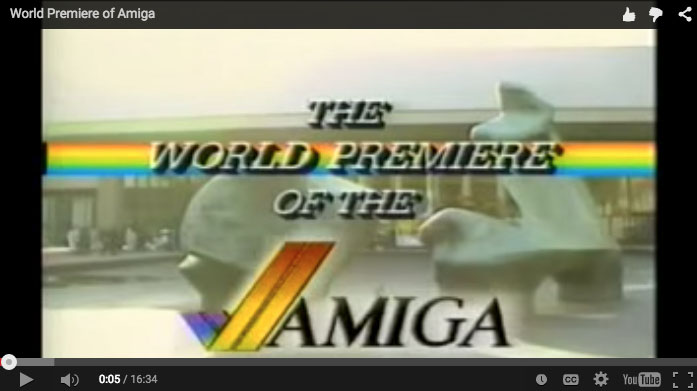 On July 23, 1985, Commodore Business Machines welcomed a shoulder-padded crowd into Lincoln Center’s Vivian Beaumont Theater for the unveiling of the Amiga 1000, a personal computer designed to put graphics front and center. At the time, 16 bits was a lot of bits, enough to make video games feasible and facilitate poor quality photo editing.

To drive the point home in the least subtle way possible, Commodore trotted out Andy Warhol, who used the computer and ProPaint V27 to create a portrait of a kind of bored looking Debbie Harry. Aside from being one of the more eighties events to occur in the eighties (right behind Reagan waving fro that window), the event essentially created a new form of modern art.

Warhol was playing the role of mascot, but he had a demonstrable interest in computers and in computer graphics. Legend goes that he and Keith Haring were introduced to digital drawing by no less than Steve Jobs at Sean Lennon’s ninth birthday party. That was less than a year before the Amiga 1000 presentation. During the interim, Warhol ignored Jobs’ entreaties to take a Macintosh and — it’s fairly clear given the results — entered into a conversation with Commodore, which decided to have their next launch at a cultural rather than a technological center.

It was a stunt, sure, but it wasn’t just a stunt. Warhol apparently kept working with Amigas and GraphiCraft software. We know this because the prominent digital artist Cory Arcangel went to ground after seeing the YouTube video of the presentation and eventually located Warhol’s digital work on a series of floppy disks in the archives of the Andy Warhol Museum in Pittsburgh. A great deal of reverse engineering was required to render them, but, well, mission accomplished. Warhol has created, predictably, a soup can and, unpredictably, a three-eyed Venus de Milo.

Today, it’s not uncommon for artists to incorporate digital elements or show their work online (for instance: Instagram is making Aboriginal art a thing), but what happened 30 years ago at Lincoln Center blew minds. With some help from a Commodore programmer in a terrible tux, he made art.