Home All About Andy 1960s 16 Jackies in Flashbulb Memory 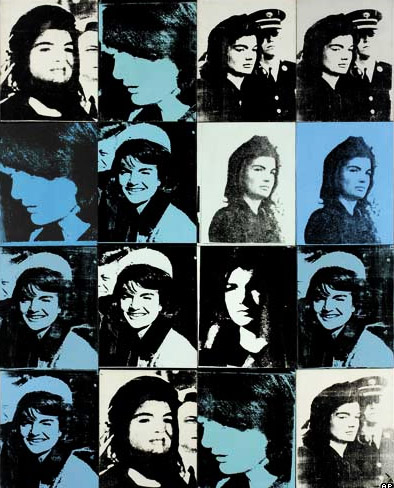 What exactly is flashbulb memory?

Warhol was impressed with the glamour of Jacqueline Kennedy, and he was unmoved by John Kennedy’s assassination. For him, the visual means of expressing detachment from emotions was to replicate images.

In 1964, Warhol cropped Jackie’s image from a larger picture to have viewers speculate what the background is. He created the image on acrylic and silkscreen ink on canvas to produce a flashbulb memory.

Warhol’s isolation and repetition of Jackie’s image was produced 16 times and suggested her solitary state. Warhol’s paintings were blown up from four news photos that appeared pervasive in the media after the assassination.

In Warhol’s view, the images became so familiar that neutral identification is all that the viewer sees and experiences.

As said by Warhol, “The more you look at the same exact thing, the more the meaning goes away and the better and emptier you feel.”

Do you agree with Warhol?